He has been referred to as a “most eccentric dentist” and his ethics were called into question on various occasions. 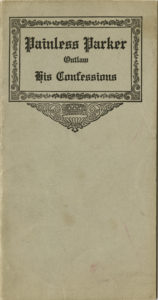 Edgar Randolf Parker was born in Tynemouth Creek, New Brunswick in 1872. His early years shed some insight into how his life evolved over time. He showed evidence of being a natural born salesman, as at age 7, he sold the school playground to a fellow classmate for 20 cents. At age 9, Edgar bartered with a neighbour to obtain a hen, eggs, and a chicken coop, with plans to become a chicken farmer. He graduated from this to gathering and selling dulce with the intent of using the money to open a store on the beach in front of his family home.

In 1884, the family moved to St. Martins, where Edgar attended high school, and in 1886 he enrolled at Acadia College in Nova Scotia, where he started out on a theological career on the advice of his Baptist parents. This did not work out well for Edgar, as he was labelled rebellious, and mischievous; he feigned illness and was sent home. At this point, the family was in the process of moving to Saint John where Edgar attended Leinster Street School. His nickname became “hookey”, as he skipped school so often. He eventually moved to Moncton, where he began a job peddling notions and was very successful. However, his father did not agree with Edgar’s “peddling” and sold the wagon and horse that Edgar had acquired. He considered that what Edgar was doing, to be very flamboyant and unprofessional. Edgar subsequently left home and signed on to one if his Uncle’s ships heading to Barbados, and he stayed at sea after this until he sustained an injury and ended up in hospital in Buenos Aires. He suffered 3 fractured vertebrae in his spine, and also contracted dengue fever. In 1889 Parker returned home and spent the entire summer in hospital. In determining his future, he had been impressed by the doctors he had seen during his hospital stay, and considered becoming a doctor, but his mother had become a believer in Christian Science and did not believe in medicine. It was then determined (through phrenology) that Edgar would be suited to pursuing a career in dentistry, and he liked the idea that he might be able to save people the type of pain that his mother had endured over a period of time with an impacted wisdom tooth. 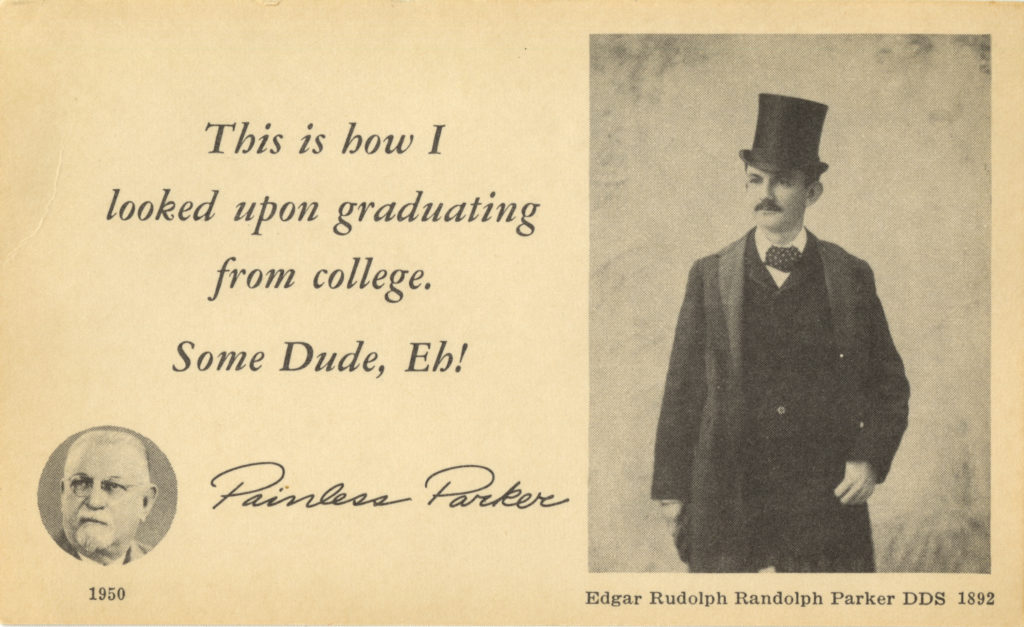 In 1889, Parker enrolled at the New York College of Dentistry at the age of 17. In order to support himself financially, he performed door to door dentistry and set up an office prior to graduating, against the College policies.  He was expelled for these actions, and returned to New Brunswick becoming an itinerant dentist in rural areas of the province. Later in 1889 Parker attended the Philadelphia Dental College, graduating in 1892 at age 20.

Parker first established his practice in a St. Martins barbershop, but found it very slow, with few patients.  He determined that people needed to be shown the importance of dental health and so he combined his dental skills with salesmanship and customer psychology by hiring a brightly painted wagon and cornet, and went to the streets. He saw himself as a patient advocate and crusader within his profession, and strongly felt that patients should be informed. Parker travelled to Hampton, NB and borrowed a wagon from the Hotel Leonard so that he could provide prepared talks. He stressed the “painless” part of his dentistry, using a new painkilling discovery (hydrocaine) and said that if he caused pain he would give the patient $5.00. People mentioned that he blew so hard into his cornet, that no cries of pain could be heard. He stayed in Hampton for just 2 weeks and then left to head west and then subsequently to various locations in the U.S., as well as Victoria, BC. 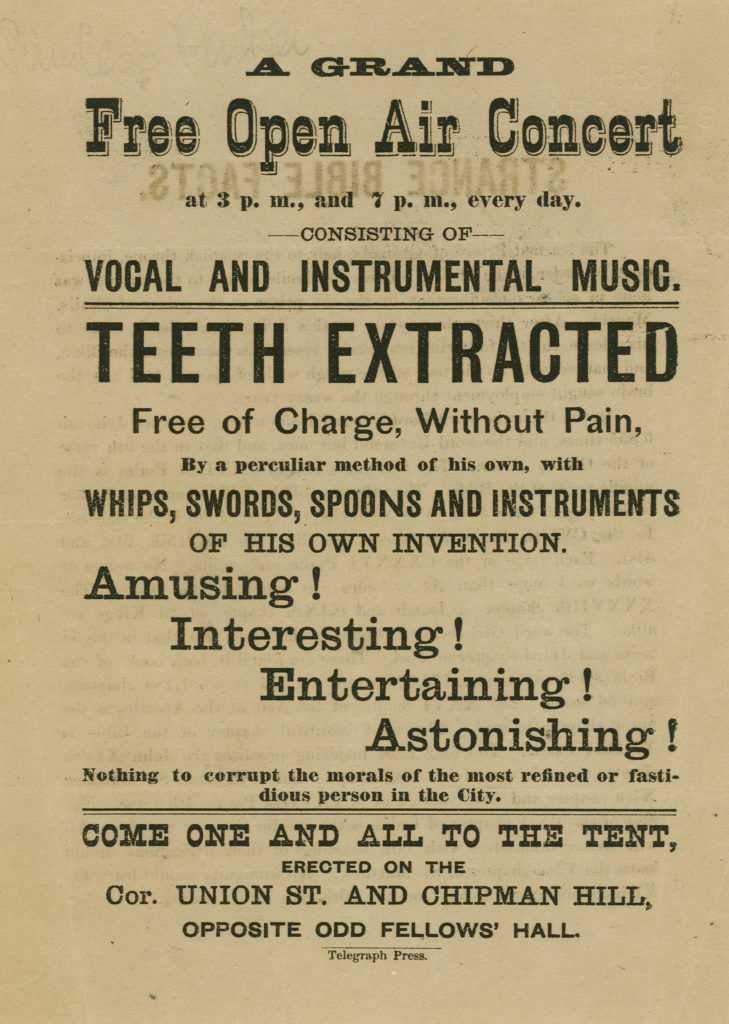 In 1894, he returned to Saint John and assembled a troupe of performers, and travelled around New Brunswick and Maine with his street dentistry. The authorities began to question him concerning his unorthodox methods and techniques In 1896 Parker moved to Brooklyn where his parents had relocated and was married to Frances Wolfe, whom he had previously met. He and Frances returned to New Brunswick and Parker opened an office in Moncton, but after a brief brush with the law and a short sojourn in PEI, they headed to California. Shortly before the birth of their first child, they returned to Brooklyn, where he set up an office and met William Beebe, a fellow who had been in the circus business for 45 years, and who convinced Parker that he could perform both dentistry and show business. Beebe was subsequently hired by Parker to be his manager and he advised Parker to go by the name Painless Parker, and to create huge signs advertising his dentistry. Beebe accompanied Parker in his wagon and played a musical instrument to attract people. 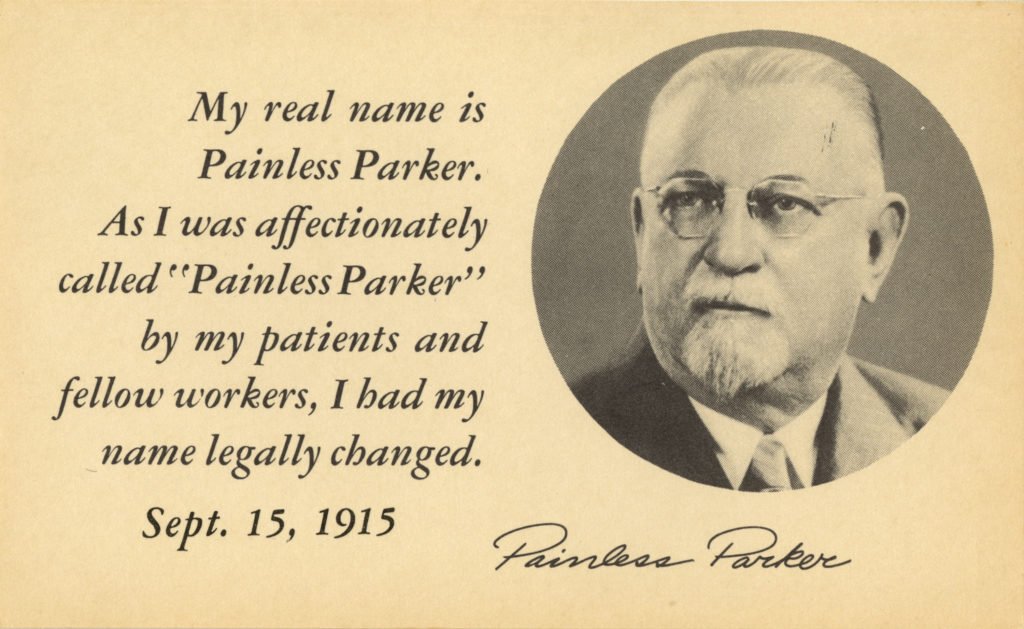 In 1902, after Beebe died, Parker moved to Los Angeles, and still performed street exhibitions, combining dentistry with entertainment; he purchased a circus and had advertising draped on an elephant. Many felt that was making a mockery of the dental profession. In 1915 he officially changed his name to Painless Parker as it was illegal to practice in California under any name other than that which they had been licensed. 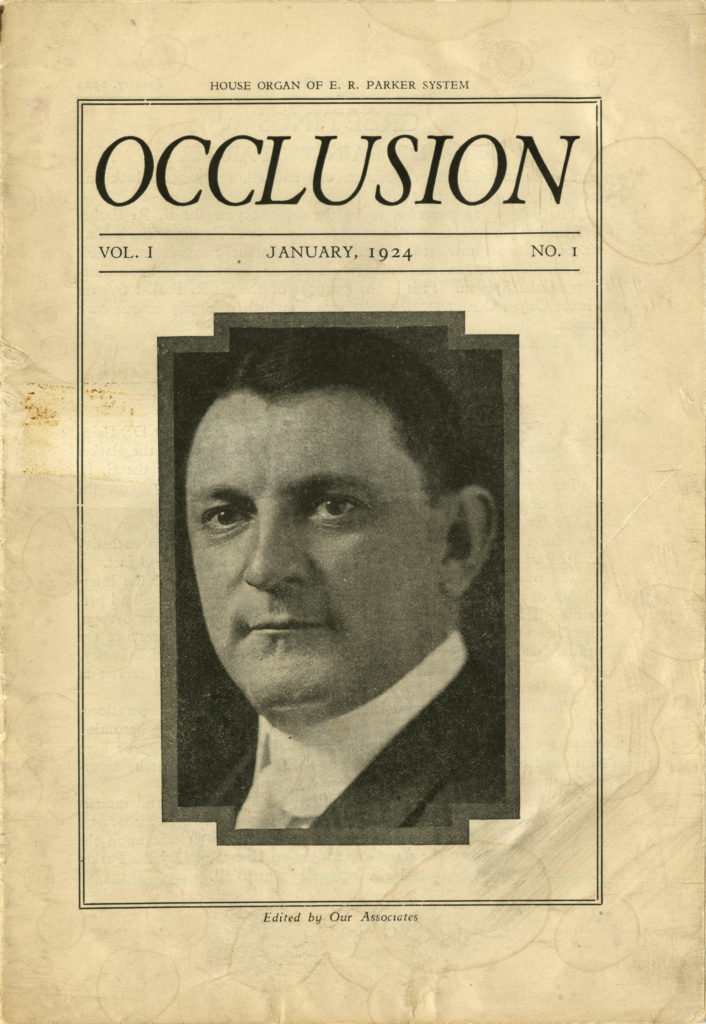 During the 1920’s and 30’s Parker used any opportunity to publicize his dentistry, and from 1923 to 32 he expanded into Colorado, still performing street dentistry and still having licensing issues.

In 1952, at the time of his death, Parker had 26 offices under lease and he had influenced (for better or worse) the development of various codes of ethics, dental practice acts and advertising practices in dentistry.

In his private life, Parker experienced the loss of one of his daughters to a car accident and he had a very strained relationship with his son Ned, who also became a dentist. Ned was very private and did not follow in the model of his father in his profession.

This is a truly fascinating story of a New Brunswick native, and to learn more, there are 2 biographies written about Painless Parker: 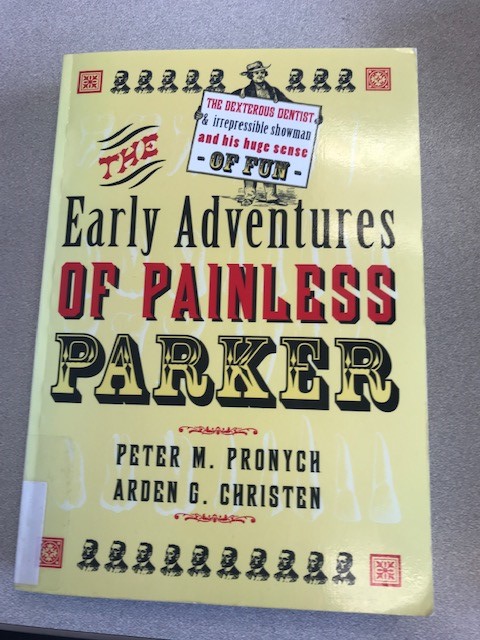 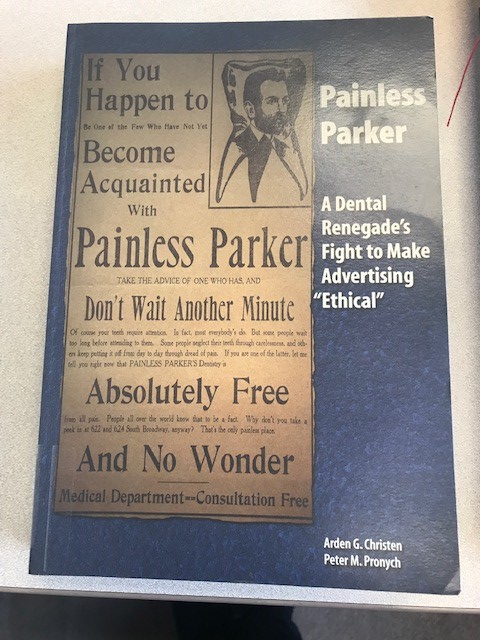 “The early adventures of Painless Parker co-authored by Dr. Peter Pronych who is a retired Professor of dentistry at Dalhousie University in Halifax, and has undertaken extensive research on Painless Parker, and Painless Parker: a dental renegade’s fight to make advertising “ethical”. By Arden G. Christen and Peter M. Pronych.

Your ticket for: Painless Parker – most eccentric dentist