These stamps – the 13th issue in Canada Post’s Black History Month series – tell the stories of two Black communities nearly one hundred years and thousands of kilometres apart. Both rose from hardships to survive and grow for a time and they served as stepping stones for the success of future generations of Black Canadians.

Peter Larocque, NBM Curator of NB Cultural History & Art says, “It will be wonderful to see these stamps in circulation.  It was a great pleasure to be part of the process, providing some historical comment and archival photographs for consideration in this important recognition of Canadian Black history from the New Brunswick Museum collections, honouring Willow Grove, one of New Brunswick’s first Black settlements.”

Learn more about Liza (Fisher) Taylor who is featured on the Willow Grove, NB, stamp and more of her story, through this information from the NBM collections. 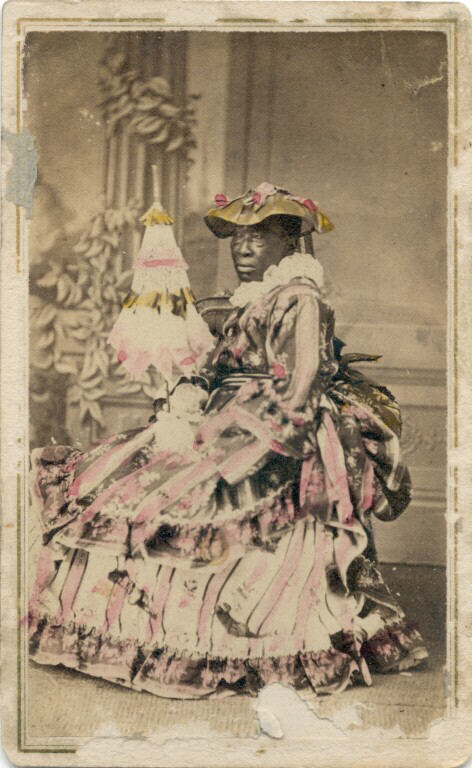 According to an obituary published in the Saint John Evening Gazette of 2 July 1889, Liza (Fisher) Taylor was born into slavery in Richmond, Virginia, in 1783 and came to New Brunswick when a child of about 5 years of age.  She went to work as a domestic servant in the household of James Peters who lived in Saint John and Gagetown.  About 1803 she ran off with local farm hand, James Taylor, and they were married by Parson Willis in Saint John.  They relocated to Willow Grove with the Black refugees who arrived after the War of 1812.  Eliza Taylor made a small income from selling clothesline poles, gum, a few brush brooms, a pair of chickens or a pail or berries that she would bring into the city.  In contests of wit, it is said that she was “never left far behind” and was well-remembered for her rollicking good humour.   Illness and poverty at the end of her life meant that she removed to the Alms House in Saint John where she died on 1 July 1889 at about 106 years of age.

SAINT JOHN, NB and ATHABASCA, AB – The challenges faced by two waves of Black immigrants from the United States in the early 19th and early 20th centuries come to light in a pair of stamps issued this month by Canada Post. These stamps – the 13th issue in our Black History Month series – celebrate the hope and perseverance of the Black pioneers who founded Willow Grove, New Brunswick, and Amber Valley, Alberta.

Willow Grove was founded in 1817 by Black refugees. Most had been enslaved African Americans who were offered their freedom and land in exchange for supporting the British in the War of 1812. They were issued licences to live on land that turned out to be of poor farming quality and received little assistance. When they tried to support themselves temporarily in nearby Saint John, they were met with racist restrictions. But the residents fought for their rights and formed a thriving community.

The Black settlers who founded Amber Valley around 1910 had journeyed from the American south to escape escalating violence and segregation laws. Seeking a better life for their families, they carved a living from the dense bush and muskeg but continued to endure ongoing racial discrimination, including government measures that prevented other people of African descent from settling in Canada. The residents, however, were determined to succeed, and the community they built flourished.

Although separated by nearly a hundred years, the two communities experienced similar hardships and triumphs, and both served as stepping stones for the success of future generations of Black Canadians.

Designed by Lara Minja of Lime Design Inc. and illustrated by Rick Jacobson, these stamps feature illustrations based on archival photos of community members, maps showing the location of each settlement, and images of the different means of transportation that carried the pioneers to their new life in Canada.

Printed by Lowe-Martin, this issue includes a booklet of 10 Permanent™ stamps featuring both designs and two Official First Day Covers – one for each stamp.

Stamps and collectibles are available at canadapost.ca/shop.

For your convenience, you can use the images, interviews and information found in our short social media videos (Willow Grove, Amber Valley)Details magazine and Canada Post magazine.