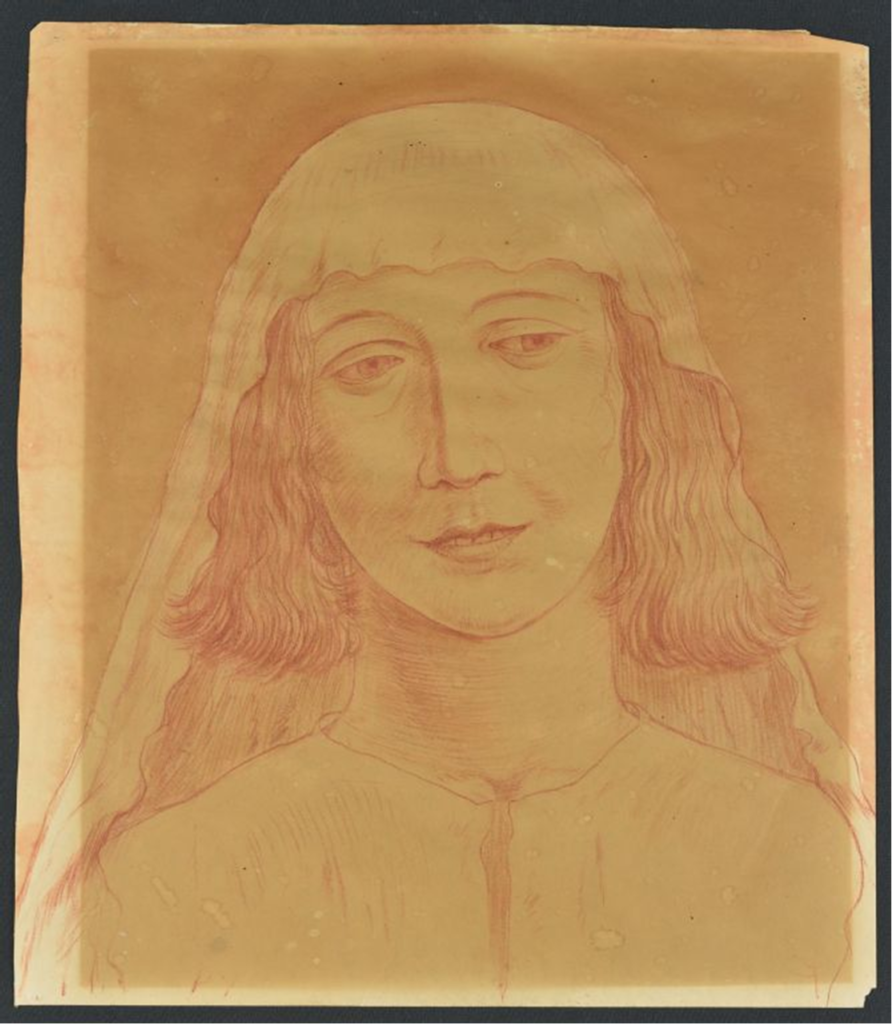 Thanks to the generosity of Wamae (Matthew) Gichuru, grandson of Kjeld and Erica Deichmann, the New Brunswick Museum (NBM) has increased its representation of the early work of renowned New Brunswick artist, Miller Gore Brittain (1912-1968).

The NBM currently houses sixty-three works by Miller Brittain including a series of portrait drawings of prominent Canadians (mostly New Brunswickers) commissioned by Dr. John Clarence Webster between 1939 and 1942.  It also contains the eleven cartoons from 1941 and 1942 that were the final working drawings for an ambitious Saint John Tuberculosis Hospital mural project that was never completed.  According to the Deichmanns’ daughter, Anneke Deichmann Gichuru, this drawing is thought to be a representation of biblical figure, Mary Magdalene. One of Brittain’s friends, Martha Collins Schleit (1916-2002), likely posed for the drawing which also dates from the height of Brittain’s pre-Second World War career. Schleit was the sitter in another NBM work, Martha, (1996.42.4), a 1939 painting that she donated in 1996.

This work is a forerunner of Brittain’s preoccupation with biblical themes during the late 1940s and 1950s.  Simply drawn but with an extremely capable and sure hand, this work features the red chalk that Brittain favoured as well as an unusual wash treatment of the background that is found on only a few of his other works during this period.  Portraiture, or more precisely the figure and especially the head, was a major subject throughout Brittain’s career.  Originally in the collection of Kjeld and Erica Deichmann (whom Brittain also drew in 1939), this work brings together many aspects of an extremely important episode of New Brunswick art history.

There are some aspects of the condition of this work that bear discussion. It is discoloured in the rectangular area of the mat window.  This is where the poor quality paper on which it was drawn was exposed to light.  It is also possible that an acidic backing of its original matting and framing may have affected the paper or Brittain himself may have used a fixative that caused this change to the image. Despite these concerns, this work provides an important example of Brittain’s materials and techniques that helps to better understand his working methods and suggests ways his work might be cared for in the future.