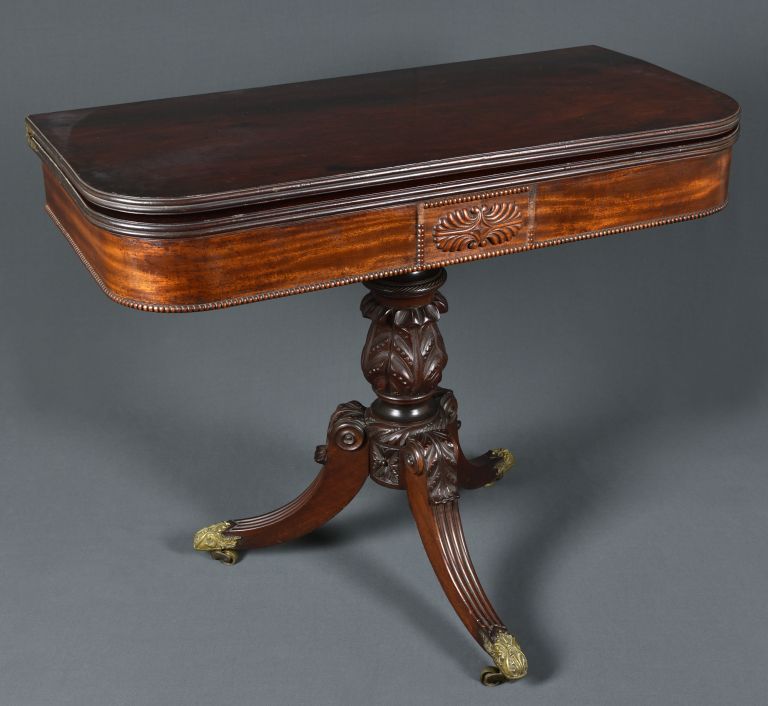 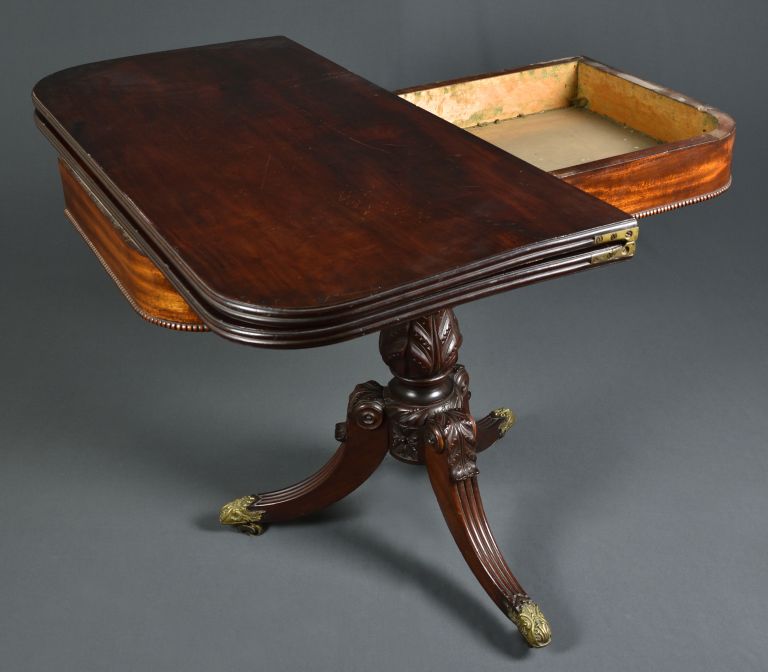 Thanks to the generosity of Christopher Hawkins (from Saint John), the New Brunswick Museum increased its ability to preserve, research, interpret and display an important piece of provincial heritage; an early 19th-century games table by renowned New Brunswick cabinetmaker, Thomas Nisbet (1776-1850).

Thomas Nisbet’s name is synonymous with late Georgian and early Victorian period furniture of excellent quality and design.  Originally from Dunse, Scotland, Nisbet immigrated to New Brunswick in 1812 or 1813 and became a freeman cabinetmaker of the city of Saint John in 1814. He worked in the trade for about thirty-five years until his retirement in September 1848. Many historians and connoisseurs consider labelled furniture produced by the Nisbet workshop as among the most important in late Georgian and early Victorian Canada.  Fine quality furniture from the Canadian eastern seaboard reflects an affluent and cosmopolitan sea-faring society.  Urban development, a skilled labour force, international access to raw materials and eager markets coalesced in early 19th-century New Brunswick to sustain a robust flowering of superior furniture craftsmanship. 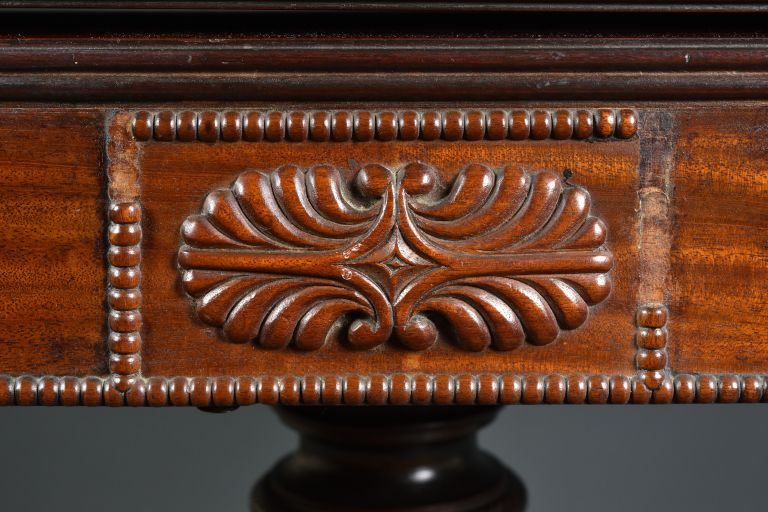 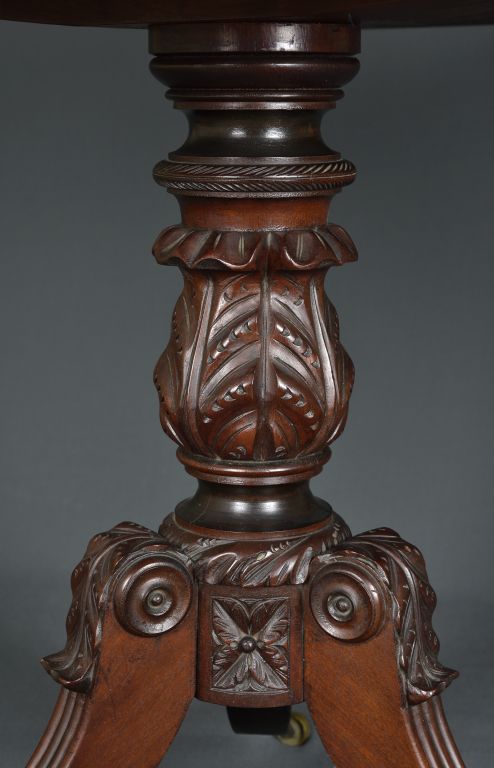 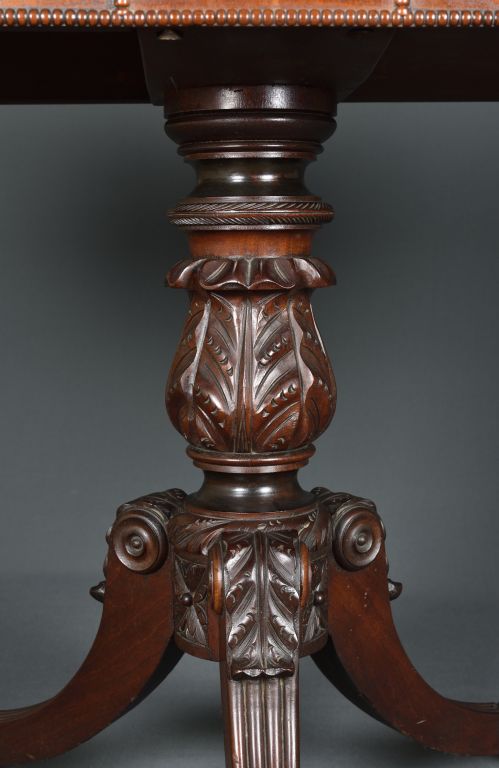 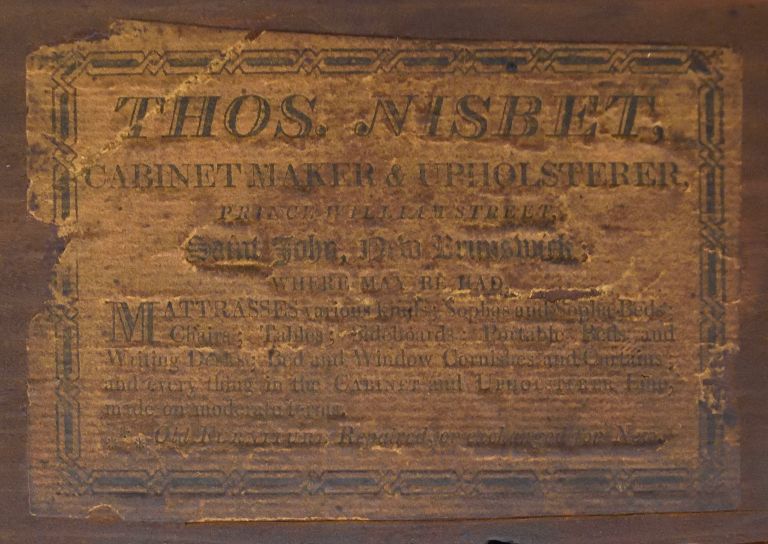 This games table (also known as a card table) was made about 1820-1830 and shows the exceptional cabinetmaking skills of Thomas Nisbet’s atelier at its finest. Parlour, card and board games became increasingly popular from the late 18th century as did specialized furniture to accommodate these leisure-time activities.  This table is made of mahogany, mahogany-veneer with pine and birch as secondary woods and brass fittings.  It consists of a veneered, folding top with reeded edge that swivels over a shallow, recessed well compartment (formerly lined with baize).  The table’s skirt is trimmed with a central, applied plaque with carved anthemion leaves (or palmettes) and the bottom edge is trimmed with a band of flattened, bead stringing.  The top sits astride a turned and carved columnar baluster with concave ebonized rings, feathered bands, as well as an unusual, modified acanthus-leaf bulb.  The baluster is set on three, reeded and tapering legs with carved acanthus-leaf knees.  The legs terminate with, for a Nesbit piece, unusually ornate brass feet fitted with casters.  The interstices between the legs are decorated with a carved, acanthus leaf plaque. In terms of proportion and detail, this games table is a distinctive and masterful achievement. Many of the design elements of this games table have not been noted in other labelled examples from his workshop.  It reflects the refined taste of the buying public as well as the superior quality of craftsmanship that emerged in an affluent pre-Confederation Maritime Canada.

Within the New Brunswick Museum’s collection of approximately 500 pieces of provincial furniture there are currently 30 pieces that are made by, possibly made by or attributed to, Thomas Nisbet (1813-1834) or his partnership, Thomas Nisbet & Son (1834 to 1848).  Currently there are four labeled Thomas Nisbet pieces: a work table (NBM1979.118.10), a games table (NBM1962.75), a lap desk (NBM1986.2) and a banquet table (NBM2017.11). In addition, there is one labelled Thomas Nisbet & Son desk (NBM2006.40) in the collection.  A diversity of furniture forms, and especially new evidence of decorative techniques and approaches, are crucial to the ongoing assessment and understanding of Nisbet’s work as a master cabinetmaker in early 19th-century New Brunswick.  In terms of the existing NBM attributed Nisbet collection, there is a games table set on four legs (NBM1972.75), a pedestal games table (NBM1967.117.2) that matches a sofa with elaborately carved griffin feet and a pair of plainly carved, pedestal games tables (NBM1982.42.6-.7).  This piece also includes an example of the first version of his second label (there are three known versions of his second label).  This is particularly useful for dating this table as well as comparison with other pieces and their verification.

The study of Nisbet’s work has been the subject of much research since the 1970s; it was included in most articles and publications on 19th-century Canadian furniture, including the seminal books by Huia Ryder and Charles Foss. For many years Professor Tim Dilworth (1939-2017), Fredericton, NB, catalogued, documented and photographed Nisbet (and attributed Nisbet) furniture in public and private collections.  He also produced a number of articles during the 1970s and 1980s as well as an entry on Nisbet for the Dictionary of Canadian Biography.  In 2012, David Nasby wrote The Art of Thomas Nisbet, Master Cabinetmaker, a catalogue to accompany an exhibition undertaken with Darrell Butler, curator at Kings Landing Historical Settlement, who gathered and studied a significant representation of Nisbet’s work. These resources underpin the significant public awareness of Nisbet’s work and career. 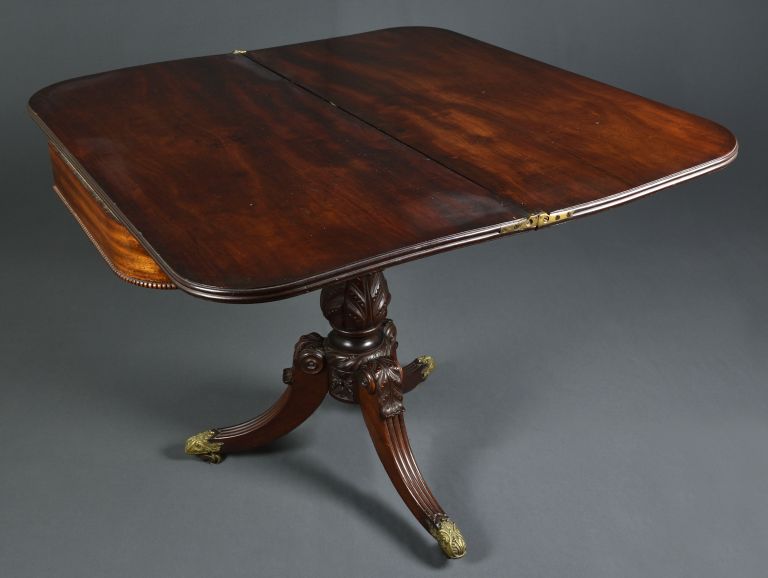 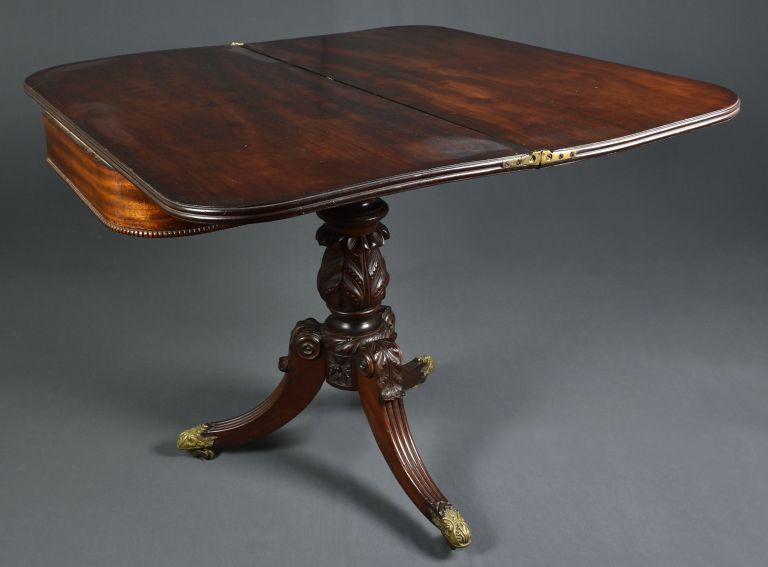 This Thomas Nisbet games table stands out from all other documented examples of his work because of its unusual details.  These aspects make it an essential reference for attributing and confirming other unlabeled works from his cabinetmaking workshop. It is a benchmark piece that provides a better understanding the range of design as well as skill associated with refined furniture of the second quarter of the 19th century of English Canada, and more specifically the Maritime provinces.  Featuring an original, authentic label, this artifact joins a select group from among Nisbet’s oeuvre that is featured across Canada in major public institutions.