The New Brunswick Museum (NBM) houses an extremely important textile collection.  In the bedding component alone, over 700 quilts, quilt tops and quilt blocks provide an excellent cross section of provincially-produced bedding.  More than ninety percent of these items originated, or most likely originated, in New Brunswick (especially Saint John, Kings and Queens Counties). The artifacts range in production date from the late eighteenth century to 2019, with the majority made between 1875 and 1925. The first quilt donated to the NBM was in 1927, the most recent in 2020.  A small grouping of twenty modern quilts, dating between 1975 and 1985, was acquired in 1995 as part of the transfer of the New Brunswick Craft Collection to the NBM.  The 2003 addition of the John Corey Domestic Textiles Collection extensively increased the representation of bedding, especially quilts.  The collection itself now provides an excellent overview of the bedding types being produced in New Brunswick in the modern era and it is one of the best resources for the study and analysis of this type of textiles in Canada.  The NBM also houses a small but significant collection of textile-working tools and equipment relating to the production of woven textiles and quilts.

In 2011, the NBM and the Marco Polo Quilters’ Guild (MPQG) collaborated to establish the New Brunswick Contemporary Quilt Award, a juried competition that would ensure that quilts made after 1960 in New Brunswick are represented the NBM’s collection.  Over the past 60 years or so, there have been major changes in quilt-making tools as well as in the methods used for making quilts.  Vast design resources and publications, specialized and custom fabrics, programmable sewing machines and “longarmers” have all impacted the production of quilts.  Some quilts have moved off beds onto walls and, with this expansion in their use, different styles of quilts have developed.  Ultimately, if it is to tell a more complete story, the NBM’s quilt collection must include excellent examples that reveal diversity of the province’s quilt-making stories since 1960.

This program dovetailed seamlessly with the MPQG’s goals.  Officially founded in 1985, the MPQG’s history dates back further.  As early as 1973, the guild was involved with the Saint John YM-YWCA and began a series of biennial exhibitions.  The NBM was involved in loaning quilts to the fairs in those early years and supporting the MPQG intermittently over the past almost 50 years, including hosting the biennial show at the Market Square Exhibition Centre since 2003.   The guild is actively engaged in supporting the community through programs such as “Thank You” quilts for the Ridgewood Veterans’ Hospital, “Victoria Quilts” for people living with cancer as well as quilts for those in Bobby’s Hospice.  Every two years, a jury is convened, a selection is made and the New Brunswick Contemporary Quilt Award ensures that a modern New Brunswick quilt is acquired for the New Brunswick Museum collection.

The first acquisition under this program was a purchase made using funds raised through the sale of a quilt block pattern, Purple Violet, designed by MPQG member, Kathy Coffin (1944-2014).  In 2011, the inaugural New Brunswick Contemporary Quilt Award went to Donna K. Young of Fredericton, NB, for her 2004 wall quilt, Railways in a Northern Land. Young, a prominent Fredericton-area quilter, submitted one of her works that had represented Canada at national and international exhibitions.  It is an exceptionally fine example of an original design combined with superb execution.  It was made for a National Fibre Art competition, Constructions of Canada, and symbolizes the role of trains in connectedness of communities across the country. 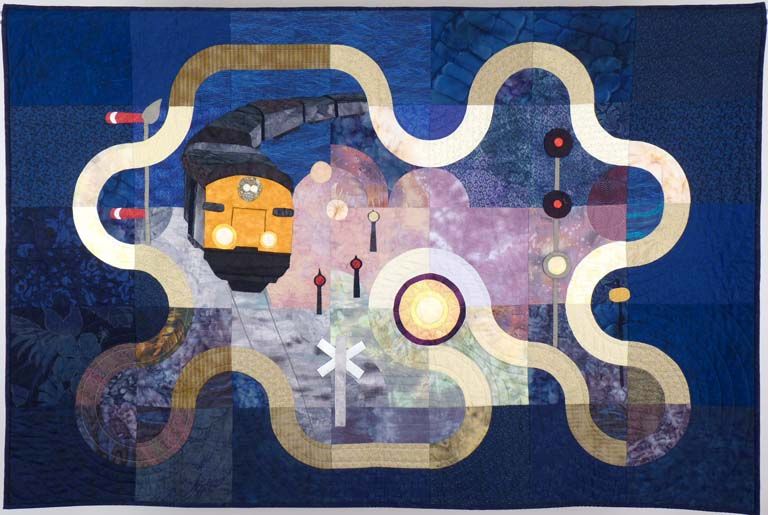 The second biennial award was won by Juanita Allain of Riverview, NB.  Her quilt, When Compasses Collide, displays impeccable execution and a high level of design complexity.  The quilt was started at a Sheila Wintle workshop attended by the maker at Quilt Canada in Edmonton, AB, in 2002.   The pattern, with its marine history and cartographic connotations, is an especially apt addition since it is not currently represented in the New Brunswick Museum collection. The quilt which also received a Best in Show award at the 2006 at the Greater Moncton Quilt Guild show has also travelled extensively in the United States and France between 2007 and 2010. 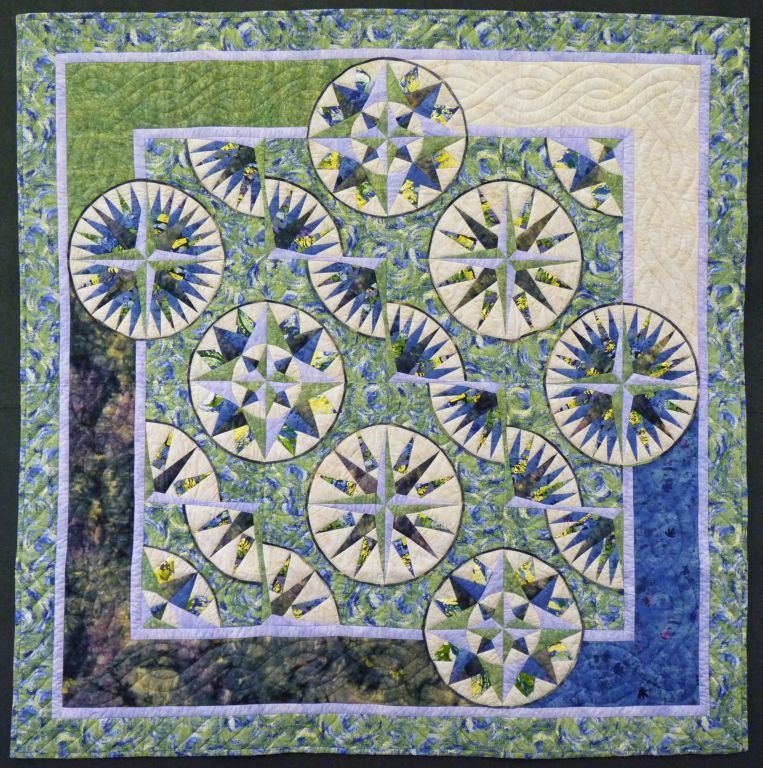 The third biennial award was won by Gail Fearon of New Line, NB.  Her quilt, Baltimore Bouquet, displays exceptional appliqué techniques, sophisticated colour choices and intricate quilting.  This quilt which is based on a style of mid-19th century quilts that incorporated a sampling of different blocks – called Baltimore Album quilts.  They became extremely fashionable along the eastern seaboard.  This quilt is an especially valuable addition to the New Brunswick Museum collection since there are no historic examples of Baltimore Album quilts represented. 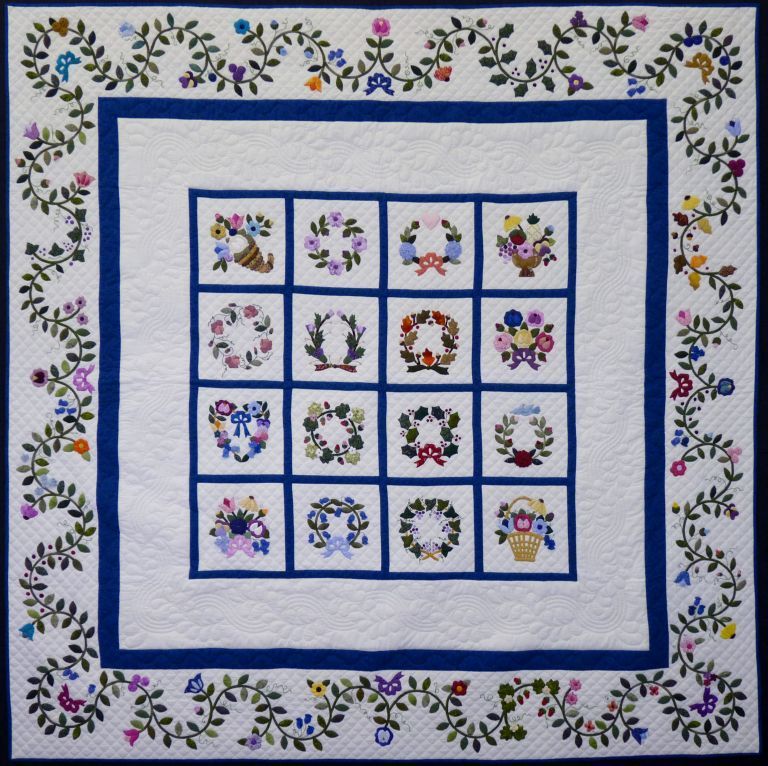 The fourth biennial award has been won by Tidal Threads Quilt and Needlework Guild of Grand Manan, New Brunswick.  Their 2011 quilt, Setting Day, features an exceptional original design, excellent piecing and appliqué techniques, sophisticated colour choices and high quality machine-quilting.  The quilt was designed to celebrate an extremely important aspect of life on Grand Manan, the annual opening of lobster season on the second Tuesday of November and it features a charming rendition of colourful buoys as well as marine flora and fauna. It is of particular interest for the New Brunswick Museum collection because it shows an aspect of contemporary quilt-making that is not currently represented – a quilt with a high-quality original design that was produced through the efforts of an entire guild. 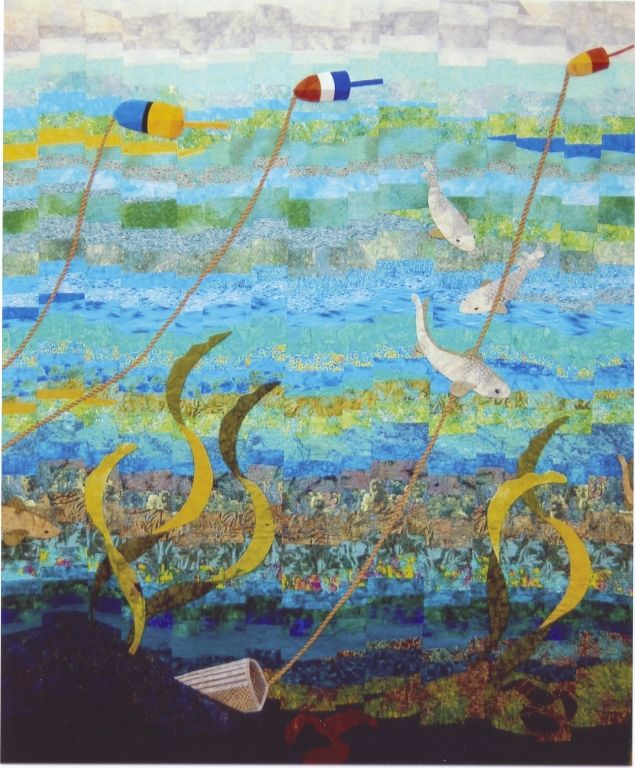 For the fifth biennial award was shared by two quilts: Lillian Clark of Saint John, NB, for her 2019 Pinwheels Galore and Christina Savoie of Point La Nim, NB, for her 2019 Statistically Speaking.  Lillian Clark’s quilt, Pinwheels Galore, was awarded First Prize in the Traditional Quilt Category earlier in 2019 at the 25th Biennial Marco Polo Quilters Guild Quilt and Fibre Art Show.  Based on a design that she had photographed in 2007 at a quilt fair in Burlington, VT, Clark’s hand-quilted masterpiece pays tribute to the traditions of her mother, Laura Blanche Knorr Watson (1909-1989), from whom she learned to hand-piece and hand-quilt. Through the careful selection of colour and placement of the simple pinwheel pattern blocks, Clark has achieved a complex and dramatic visual composition.  Christina Savoie’s quilt, Statistically Speaking, was accepted into the 2019 Canadian Quilters’ Association National Juried Show held in Ottawa, ON, and it was awarded the Viewers’ Choice ribbon at the Where Friends Gather Quilt Guild exhibition held in Charlo, NB in October 2019.  An outstanding example of Free Motion Quilting, Savoie’s quilt displays an expert combination of design and skill.  Inspired by the media’s graphics showing trends and comparisons about climate change, the quilt encourages viewers to connect with aspects of the natural world, including subtle depictions of flora and fauna, which are ordinarily concealed by those quantitative and daunting statistics. 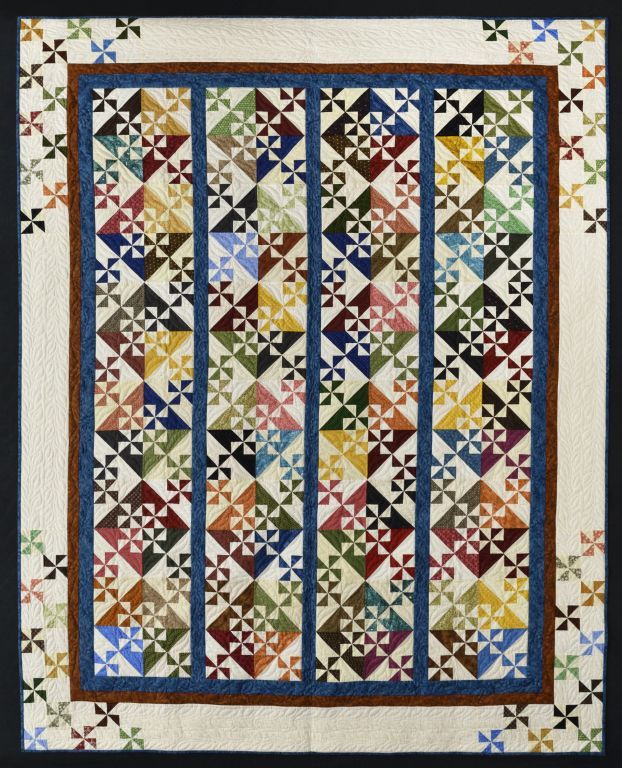 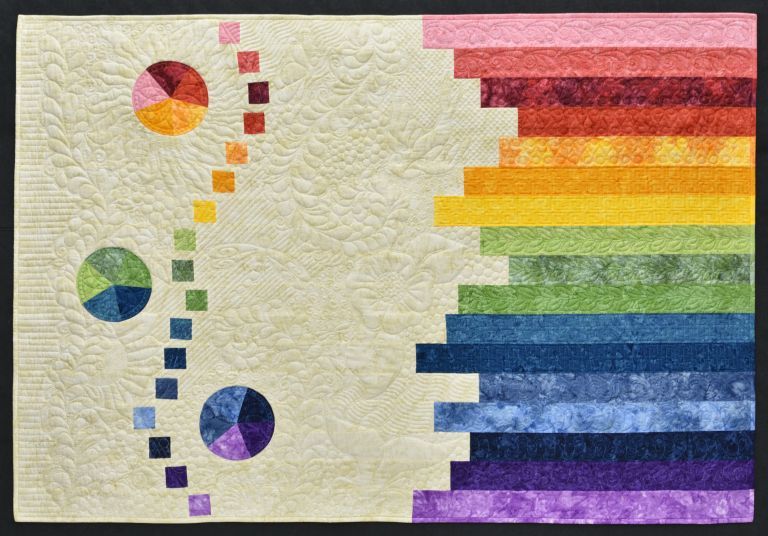