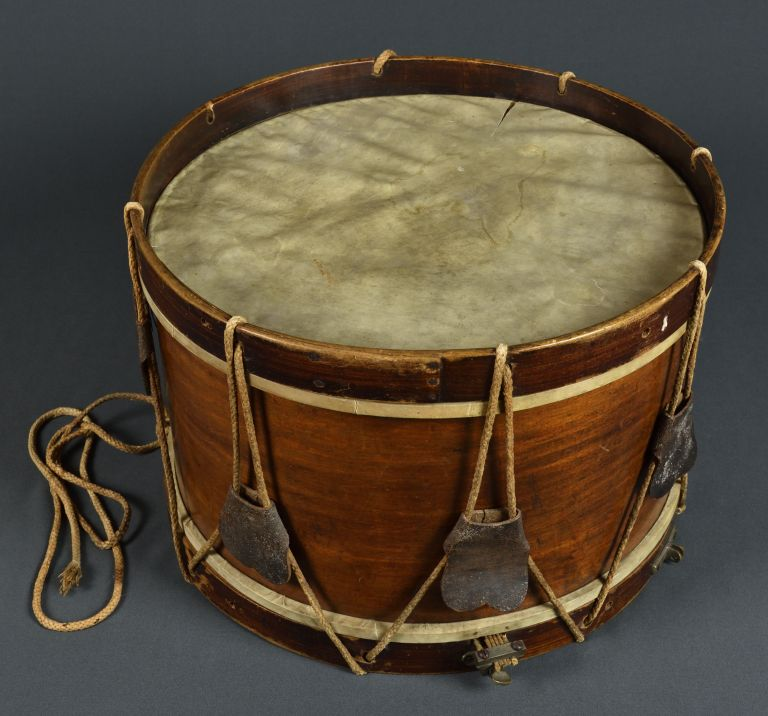 Thanks to the generosity of Sandra Dodds, the New Brunswick Museum has received a very important addition to its collection of historical musical instruments.

The NBM houses a small collection of Western musical instruments including three drums: the 2nd Battalion New Jersey Volunteers snare drum [or field drum] from 1777 (23761), the Royal Canadian Mounted Police Band base drum made in 1883 by David Patterson, Saint John, NB, (1980.27) and the Carleton Cornet Band [inscribed with 104th Artillery Battalion and 26th Battalion crests] base drum, made in Toronto by Whaley, Royce & Company Ltd., c. 1880-1890 (1968.54).

This drum provides valuable material evidence of New Brunswick’s social history as well as access to our intangible musical heritage – an aspect of which only exists when performed.   Community bands appear to have been well established in New Brunswick by the 1870s and the St. George Cornet Band had already built a significant reputation by 1885; in fact, the Saint John Telegraph Journal of 22 October 1885 related that “…[t]he band played many airs in their usual good style…” at the opening of the newly constructed fish ladder at St. George.  This is a good indication that by that point the band already had been performing publicly for some time.  Throughout the 19th and early 20th centuries, many celebrations and events were accompanied by musical entertainment: parades, political rallies, and important civic holidays.  Often picnic excursions, that were coordinated in support of fundraising for the bands themselves.

This John C. Haynes & Co. snare drum is a very good example with what appears to be its original animal hide drumhead.  The company was a well-known business operating out of Boston, MA, that made musical instruments between 1865 and 1900 and continued into the early 20th century as a retailer of pianos and instruments. It is not a surprising origin considering the close connections between Boston and New Brunswick and is a good example of the importation of luxury goods.  The NBM Archives & Research Library houses significant published holdings related to music and archival material relating to band performances as well as original sheet music.

This drum belonged to St. George Cornet Band members, James Dodds (1859-1905) and his brother, Robert Dodds (1867-1905).  The Dodds family of Saint George, NB, who were involved in the major local granite industry, as Epps, Dodds & Co. which operated a granite-finishing mill that employed about twenty hands for cutting, surfacing, carving and polishing.   In 1981, the NBM collected a group of fashion costume and accessories belonging to Adelia Anne Epps Dodds (1858-1941), the wife of James Dodds, owner of the drum.