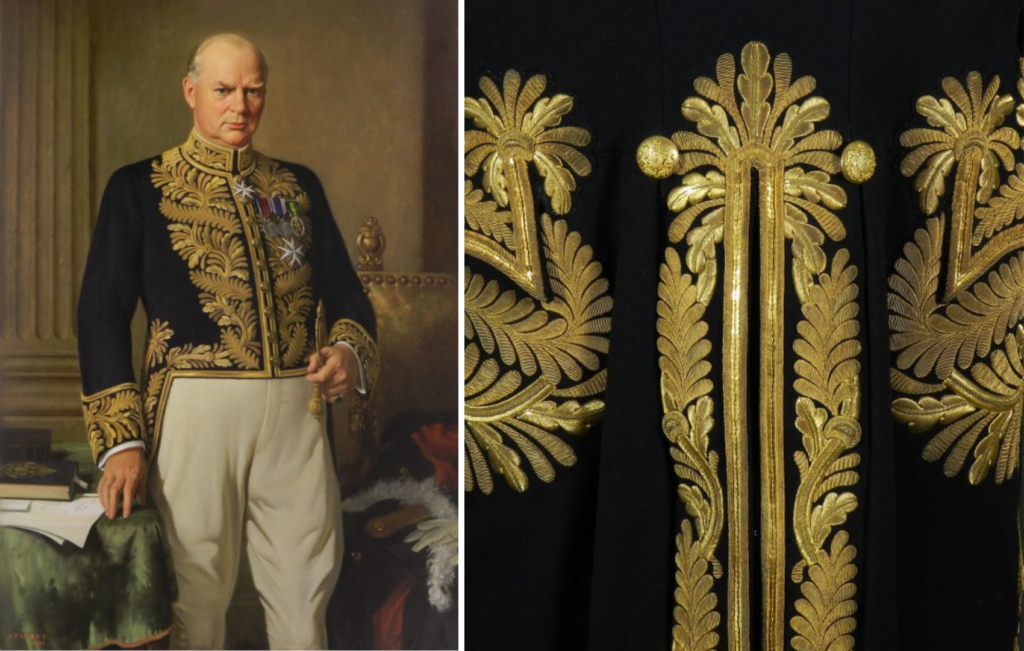 The New Brunswick Museum is very pleased to collaborate with the Albert County Historical Society (Albert County Museum & R.B. Bennett Centre) on a special feature display of the Privy Councillor Uniform Jacket that belonged to Prime Minister Richard Bedford Bennett (later Viscount Bennett).   This richly embroidered jacket was worn by Bennett for official functions when he was President of the Canadian Privy Council between 1930 and 1935.  It was included in a private portrait of Bennett painted by Kenneth Keith Forbes in 1938 that was presented to Bennett on his retirement from the leadership of the Conservative Party of Canada on the 6th of July that year.  Custom-made by Ede & Ravenscroft of London, a venerable British firm of tailors, whose history dates back to 1689, the jacket was bequeathed to the New Brunswick Museum upon Bennett’s death in 1947.

In commemoration of the 152nd birthday of Prime Minister Richard Bedford Bennett, his Privy Councillor’s uniform jacket will be on display 3rd July 2022, from 1:00 pm to 4:00 pm at the Albert County Museum during the annual R.B. Bennett Day.

The public is invited to the Records Office where the celebration begins at 1:00 pm with R.B. Bennett’s nephew, Mr. William Herridge Q.C., cutting the ribbon to officially open the newly refurbished R.B. Bennett exhibit. The displays share the life story of the only New Brunswick-born and 11th Prime Minister of Canada, the Honourable Richard Bedford Bennett.

Mr. Peter Larocque, Head of the Humanities Department and Art Curator at the New Brunswick Museum will provide comments about the Privy Councillor’s Uniform Jacket that was worn by Prime Minister Bennett.

Additional presentations and refreshments will follow in the Community Hall.

The Albert County Historical Society is grateful to the New Brunswick Museum for permitting the treasured Privy Councillor Uniform Jacket to be a featured display at this celebratory event. The Society also acknowledges the financial support provided by the Provincial Department of Tourism, Heritage and Culture for the refurbishment of the R. B. Bennett Exhibit.

Your ticket for: One Day Only! New Brunswick Museum Displays Treasured Uniform at Albert County Museum