New Brunswick Museum wants to hear about your bats 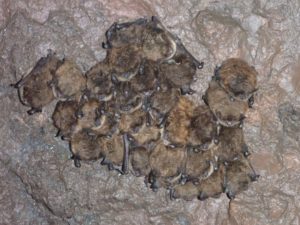 New Brunswick’s bats have been decimated by white-nose syndrome (WNS), a fungal disease that affects bats during hibernation. In partnership with the New Brunswick Department of Energy and Resource Development, New Brunswick Museum Curator of Zoology Dr. Donald McAlpine and NBM Research Associate and Trent University PhD candidate Karen Vanderwolf are asking the public to help locate bat maternity roosts, which may be in attics, barns, or bat boxes. Female bats gather in colonies to raise their young. Bats arrive in May from over-wintering sites in caves and mines and stay until the young are ready to leave in July. You may see bats leaving a roost at dusk, hear the bats calling during the day, or notice bat droppings

Since it was first discovered in New York State in 2006, WNS has spread to 33 U.S. states and seven Canadian provinces, killing over six million insect-eating bats. In some populations, mortality has approached one hundred percent.

Although devastating for bats, WNS does not directly affect humans. However, the loss of bats from WNS may impact the economy, the environment and human health, since bats eat agricultural pests that damage crops and decrease the need for the use of pesticides. Bats also consume insects such as mosquitoes that pose risks to human health.

WNS was first discovered in New Brunswick in 2011 during NB Museum field studies and by 2015 had led to a 99% reduction in the winter bat population in caves and mines in the province. All three bat species using New Brunswick caves and mines for over-wintering were assessed as endangered by the Committee on the Status of Endangered Wildlife in Canada (COSEWIC) in 2013. However, some bats have survived despite WNS exposure, and research is currently being carried out to learn more about these survivors.

The results of this project are expected to contribute valuable information towards assessing the status and recovery potential of bat populations in New Brunswick.

If you have bats in your house (outside the living space – attic, walls, eaves trough, under roofing, etc.), barn, or bat houses, don’t touch or disturb them, but please contact Karen Vanderwolf at 705-875-4891 or kjvanderw@gmail.com or Dr. Donald McAlpine at 506-343-4432. However, if bats have access to the living space, they should be removed; home owners should call a Nuisance Wildlife Control Operator or a pest control company for assistance with this. If a person or their pet has come in direct physical contact or suspected contact with a bat, they should call 811 or seek professional medical advice immediately.

Your ticket for: New Brunswick Museum wants to hear about your bats

New Brunswick Museum wants to hear about your bats