Conservation of a Victorian Memorial Wreath

A Victorian memorial wreath on exhibition at the Bonar Law site, had suffered some disfiguring damage over the years. NB Heritage Branch asked the New Brunswick Museum for assistance with examining and stabilizing the object. Conservator Dee Stubbs-Lee is up for the challenge! 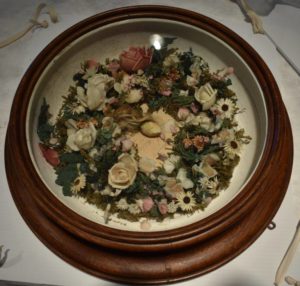 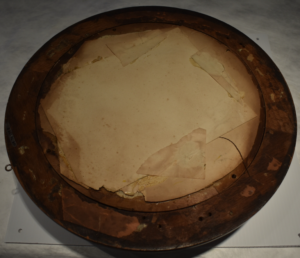 The object appears to be a memorial to three siblings who had all died at a young age. It consists of a wreath of dried plant material, wax flowers and a typeset paper memorial card, as well as locks of the deceased children’s hair, all arranged within a round shadow box frame. The object exhibits damage consistent with the effects of exposure to fluctuating environmental conditions over many years. The challenge for the New Brunswick Museum will be to try to help shed some light on the story of the family whose children are memorialized, and to stabilize the artifact so that it can continue to be exhibited and interpreted at the Bonar Law site. 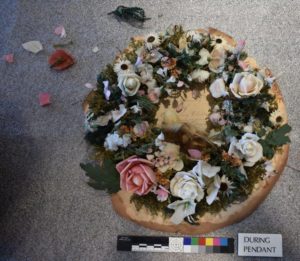 During treatment, wreath removed from frame. 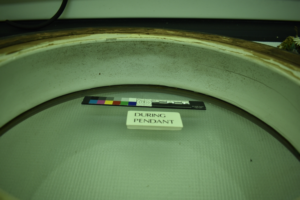 During treatment, detail of mold growth on the frame interior.

The memorial wreath from the Bonar Law site came to the NBM Conservation lab with a number of serious and challenging condition issues. Among these were years of dust and dirt that had made its way inside the shadow box, large cracks that had formed around the inside perimeter of the shadow box frame, loose nails, mold, badly deteriorating acidic paper, detached and broken wax flowers, other wax flowers that had melted and deformed, friable and fragile dried plant material, an entirely unstable secondary support made of layers of cardstock and newspaper to which the wreath components were stitched and which also formed the back of the frame assembly, and detached and tangled locks of hair from the children who were memorialized in the wreath. 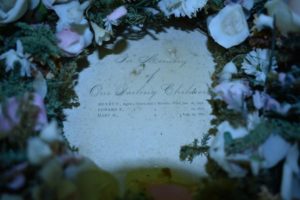 Very little was known of the provenience of the mourning wreath from the Bonar Law site. The memorial card within the wreath lists the dates of death, age at death, and first name and middle initial of each of three young siblings (Henry, Edward, and Mary) who had all died in childhood, but does not include their family name. The death dates and ages were partially obscured by displaced pieces of the damaged wreath, but careful manipulation of the artifact at the NBM Conservation Lab revealed this additional information. NBM Curator Peter Larocque then researched provincial vital statistics records and was able to determine that these facts match the death records for the children of Joseph and Mary Crockett Seymour of Saint John. Peter was also able to estimate that the wreath was made in 1876 because a fourth child, Lillian, died in January of 1877. Heartbreakingly, yet another sibling, William John, passed away in 1885. 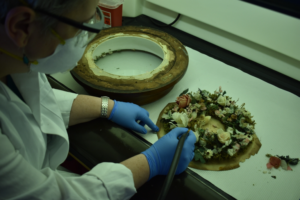 Conservator Dee Stubbs-Lee uses a specialized vacuum cleaner to gently remove dust and mold spores from all components of the memorial wreath. She is wearing personal protective equipment and working in the fume hood due to the potential toxicity of the mold. 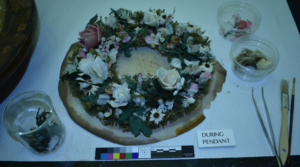 The interior components of the wreath after initial dry cleaning and separation of the detached and broken pieces. 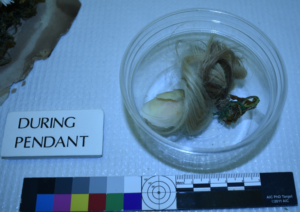 Locks of hair of the three deceased children tied around a wax rose petal, after initial cleaning and straightening. 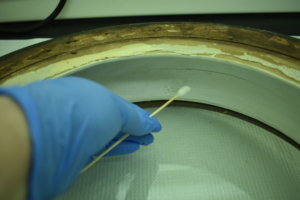 Conservator Dee Stubbs-Lee treating the mold growth on the interior of the shadow box frame. 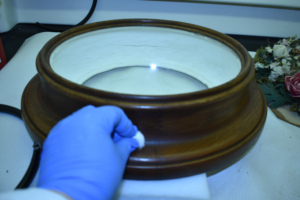 Conservator Dee Stubbs-Lee cleaning and polishing the exterior of the shadow box frame. 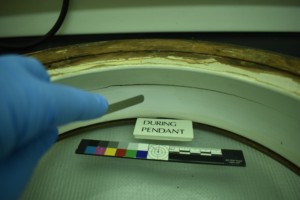 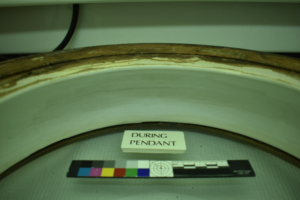 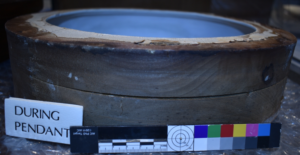 Side view of the inner frame assembly showing extensive cracking which is causing multiple issues. 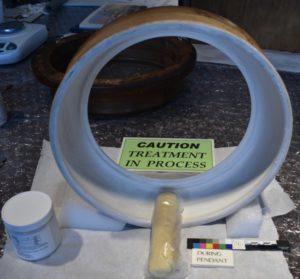 Repairs in progress on the inner frame.

The conservation repairs of the interior lining of the shadow box frame (mold removal and the repair and inpainting of two large cracks) is now complete. The outer frame is being prepared for new hanging hardware and addition of a protective corrugated polyethylene board backing which will protect the object from physical damage from any impacts on the reverse side, provide better protection against the damaging effects of fluctuations in temperature and relative humidity, and provide better defense against dust, mold spores and insects. 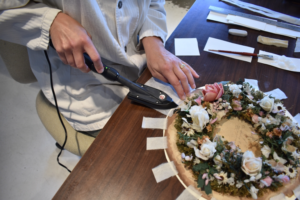 Japanese paper hinges being applied to attach the cardboard support to a secondary support of archival matt board. 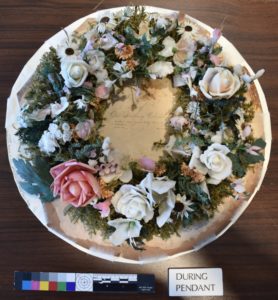 The wreath is now attached to the secondary support of archival matt board. If you look carefully you can see the paper hinge tables all around the edges. These will be hidden once the frame is reassembled.

The fragile original support under the wreath, which was made of deteriorating glued layers of paper and cardboard has been attached to a new archival quality matt board with “hinges” made of a very light but strong handmade Japanese paper attached to the artifact with wheat starch paste. This new support layer allows safer handling for the remaining fine repairs being made to the wax flowers. It will also provide some additional strength and environmental buffering capacity to the reassembled artifact, helping to ensure its long term preservation. As with all conservation repairs at the museum, great care is taken to select materials that will not cause any harm to the artifact, each and every change made by the conservator is clearly identified and documented, and all of the conservation treatment work is done in a way that will remain permanently reversible should problems arise in the future. 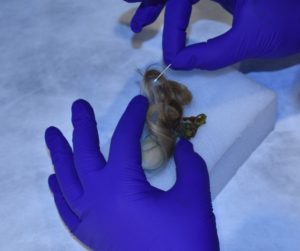 Conservator Dee Stubbs-Lee secures the locks of hair from the three deceased children into the original bow configuration around the wax rosebud using hair silk thread. 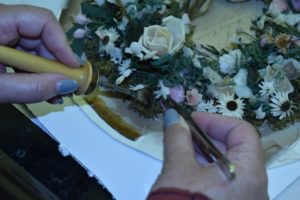 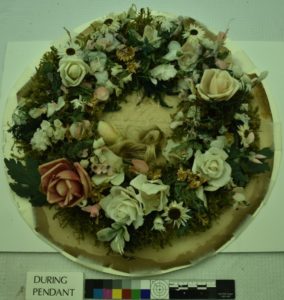 Repairs to the wax flowers and moss wreath are now complete and the locks of the children’s hair has been reattached in its original position.

The most exacting steps in the conservation treatment of the memorial wreath included the work done on the locks of hair from the deceased children and the repairs to the delicate wax flowers. These repairs were executed under magnification using fine dental, surgical, and conservation tools, dental wax and conservation adhesives. Steady hands and plenty of patience are important attributes for the museum conservator! 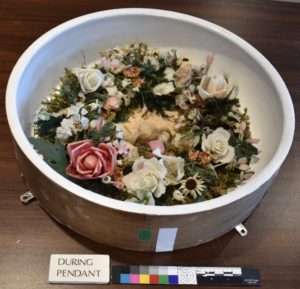 The wreath assembly on the new matt board support was placed with the frame rebate from the underside. The new metal brackets for attaching the rebate within the outer frame can be seen in this photo. 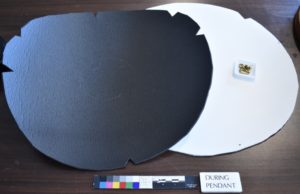 New backing layers for the framed wreath were constructed from Volara (a chemically stable, crosslinked polyethylene foam) and Coroplast (a chemically stable corrugated polypropylene board). These will not only help protect the back of the wreath from damage but will also act as buffering materials to help protect the artifact against damaging changes in temperature and relative humidity, and provide added protection against dust and insects. 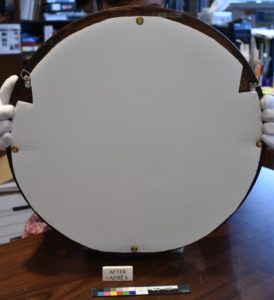 The conserved wreath from the verso (reverse) side, showing the new backing and hanging hardware. 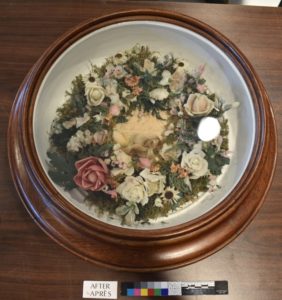 The recto (front) side of the wreath after completion of the conservation treatment.

The final stage of the conservation treatment was the reframing of the wreath. The wreath assembly was inserted into the back of the frame rebate from the underside, the glass was cleaned and repositioned over the rebate and stabilized using a wax seal, the outer frame was then lowered over the rebate and glazing, the rebate was attached to the outer frame using new metal brackets, and a custom protective backing and new hanging hardware were attached to the back. The whole conservation treatment process took several months, but resulted in a cleaner, safer, more aesthetically pleasing, and more stable artifact which will be reinstalled at the Bonar Law site in Rexton, NB.

Your ticket for: Conservation of a Victorian Memorial Wreath

Conservation of a Victorian Memorial Wreath