NBM-MNB > Exhibitions > Music of the Eye II: Architectural Drawings of Saint John and Its Region

Music of the Eye II: Architectural Drawings of Saint John and Its Region 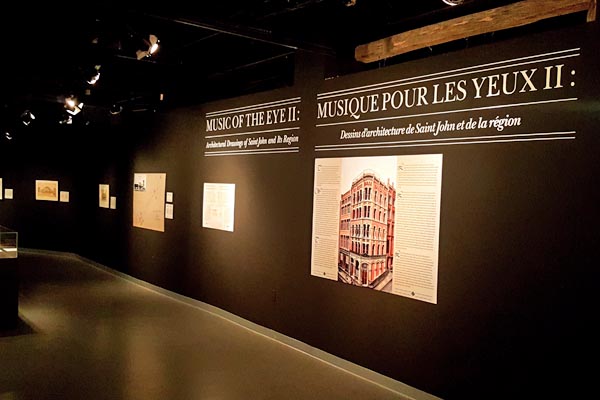 The city of Saint John, as we know it, was built as a response to the arrival of over 15,000 American Loyalists in its harbour in 1783, refugees from the American Revolution. Two years later the city was incorporated, its charter based on that of New York from whence they had sailed. The infant city was favourably located at the mouth of the St. John River which stretched into the hinterland for 300 miles where in the next three decades a large timber shipping industry was established. This later gave life to shipbuilding.

Wood was therefore a common factor in house construction, most of it resulting in the 2 ½ storey Pitch roof colonial style familiar on Long Island, New Jersey and New York. Indeed the latter influenced the placement of second floor windows tight against the roofline. A few with means preferred the hip roof and the gambrel style was also known. After the War of 1812 a new element harkened change – British immigration, especially the Scots thought in stone not wood. John Cunningham was its most influential proponent designing two neoclassical villas, a town house and a county court house in the late teens and early 1820s. Before his departure to Boston at mid-century, Cunningham had dabbled in the early Victorian Gothic and his successor, in every sense, English born Matthew Stead continued this approach. Stead too was attracted to the pointed arch and Gothic styling as well as the Italianate for domestic work but here again American influence came to play, notably the designs of theorist and author Andrew Jackson Downing. Typically it was church commissions more than housing that exerted a British influence, particularly the Anglican neo-Gothic 14th century movement from the mid-century period on. Stead was active in both this and later Victorian styles such as the Second Empire and commercial Italianate.

The Great Saint John Fire of June 20, 1877 destroyed two thirds of the city and it was rebuilt by an army of architects, many from south of the border but others from the city who had earned their stripes in building design from the 1860s on.  They competed effectively for commissions in this crowded milieu as a great exhibition of brick and stone buildings was installed in the city centre and its south end. Queen Anne and Romanesque styling dominated the late 19th and early twentieth centuries as signs of an early Modernism appeared.  In one instance this took the form of repeated stories under a roofline and towers coated alternatively in Gothic and Second Empire styling for a proposed city hall in 1911. Ultimately some of these historical coatings would disappear as the century progressed.

Financial support for this exhibition has also been graciously given by the Architect’s Association of New Brunswick, and Royal Architectural Institute of Canada.

Register for Exhibition: Music of the Eye II: Architectural Drawings of Saint John and Its Region

Your ticket for: Music of the Eye II: Architectural Drawings of Saint John and Its Region

Music of the Eye II: Architectural Drawings of Saint John and Its Region