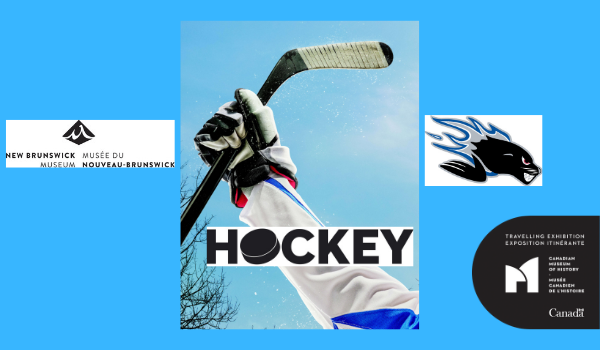 Hockey is many things — shinny on a frozen pond, the sweat-soaked smell of a locker room, a winning wrist shot, a roaring crowd. But most of all, it is an enduring national passion that brings Canadians together regardless of geography, language, gender or age. The New Brunswick Museum is celebrating Canada’s game with a one-of-a-kind travelling exhibition from the Canadian Museum of History. Hockey, presented until May 12, 2019, looks at how the sport has influenced our lives, and what that reveals about us as a people.

From Paul Henderson’s winning goal for Canada in the 1972 Summit Series to Manon Rhéaume’s debut as an NHL goalie to Sheldon Kennedy’s advocacy on behalf of sexual abuse victims, Hockey revisits game-changing moments and players. By highlighting tabletop hockey games, Roch Carrier’s classic story The Hockey Sweater, and Shania Twain’s NHL-inspired stage outfits, the exhibition also reminds us of how deeply hockey is woven into the tapestry of Canadian life.

To further compliment this exhibition, the NBM has borrowed some unique New Brunswick hockey artifacts from the New Brunswick Sports Hall of Fame, in Fredericton, N.B. which was established in 1970 to honor outstanding athletes, teams and sport builders in New Brunswick. The artifacts on loan to the NBM include Willy Eldon O’Ree’s ceremonial jersey, and a signed baseball cap. O’Ree, native of Fredericton, is a Canadian former professional ice hockey player, known best for being the first black player in the National Hockey League. O’Ree played as a winger for the Boston Bruins, and in recognition of his historical impact of this NHL career, in November 2018 he received the Honoured Member Status in the Hockey Hall of Fame.

Hockey fans are sure to enjoy the fun interactive activities that are planned including a chance to sit in a recreated living room complete with couch and TV to take in the 1972 Summit Series between Canada – Russia; mini hockey nets and gear; and a unique photo booth to capture you and your hockey friends together, etc.

Dominique Gélinas, Head, Exhibitions & Visitor Experience notes that “this exhibition is humbling, and revives the joy of playing and watching this national sport. It’s a good time to realize that everyone, from near and far, has childhood memories of hockey. It’s part of our shared memory”.

“The Canadian Museum of History is thrilled to share Hockey with the people of New Brunswick,” said Mark O’Neill, President and CEO of the Canadian Museum of History. “Whether we hit the ice or cheer from our living rooms, hockey is more than just a game to Canadians. It has helped shape our history and our national identity from coast to coast to coast.”

The exhibition is an engaging two-dimensional display that uses photographs and reproductions of key artifacts, memorabilia and works of art to present hockey highlights from yesterday and today. Listen to audio archives from hockey history and get into the game by recording your own running commentary, just like legendary sportscaster Foster Hewitt.

Get half price admission to this exhibition by showing your Sea Dogs ticket from the 2018/2019 season and you will receive 50% off admission to the New Brunswick Museum until May 12th.

Visit our website and social media channels often for updates and information on future activities and programs that will take place during the time this exhibition is here at the NBM!

The NBM wishes to thank its partners and sponsors of this exhibition while on tour here at the NBM including: The Saint John Sea Dogs, Tim Horton’s, New Brunswick Filmmakers’ Co-operative, New Brunswick Sports Hall of Fame, and Leon’s.

Your ticket for: HOCKEY