The Paris Crew and John O’Neill

Competitive rowing began on Canada’s east coast during the early 1800s and developed out of one of the primary means of living; the water-based industries, including fishing, shipbuilding, and shipping.[1] As the century progressed, rowing gained popularity as a pastime and rivalries, and wagering became common among fishermen and other waterway workers.  This led to competitions among single rowers and/or crews to be the fastest and strongest on the water. This is where the Carleton Crew, better known as the Paris Crew and Canada’s first sporting heroes, find their origins. 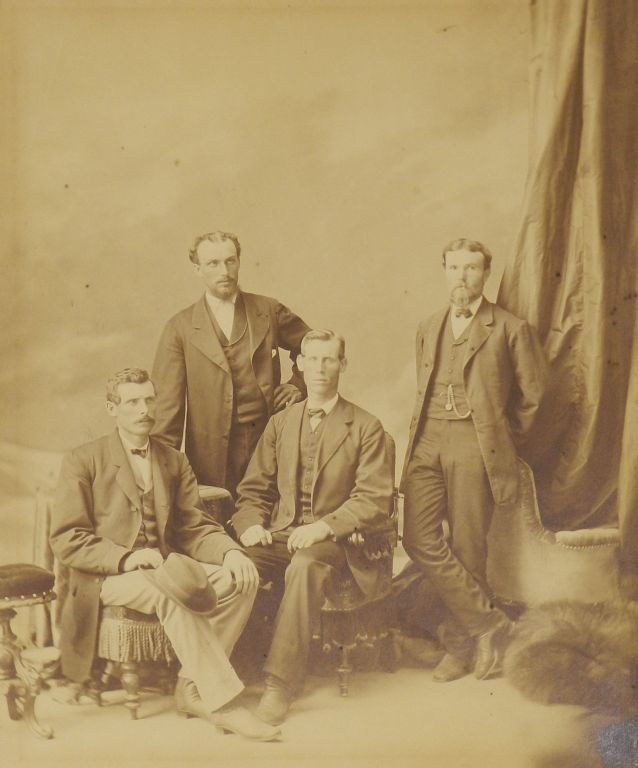 In Saint John, NB, competing crews from various neighbourhoods and other areas regularly raced on wagers. In 1866, the Carleton Crew made up of Samuel Hutton, Elijah Ross and Robert Fulton, chose Robert Price to be their fourth. Little did they know that they had just formed a world-class crew that would go on to win against several of the most established and prestigious teams in Europe and, later, North America. It should not come as a surprise that all four men worked on the water; Ross as a lighthouse keeper and the other three as fishermen.[2]  This is important to note because they would have worked countless hours on the Saint John River and harbour, navigating in all conditions. This type of intense physical work produced strong and nautically experienced oarsmen.

Having established their dominance over other crews in the area, the Carleton Crew went to Paris for an international exposition announced by Emperor Napoleon III in 1864. Only days after the official confederation of Canada in 1867, the group of young men from New Brunswick lined up for two races at the Paris Exhibition. With a strong start, high stroke rate, and the resilience they had gained from working on the water, the underdogs won both races and were famously dubbed the “Paris Crew.” 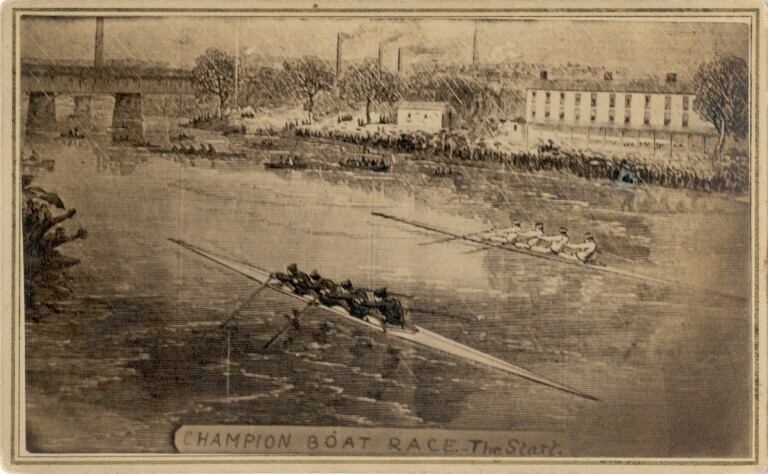 The New Brunswick Museum’s sculpture, The Start, is a wooden and wire sculpture modelled (or imagined to be) after the start line of the Paris Exhibition Regatta. It is one of three models in the collection made by career boat-maker and amateur vernacular or “folk” artist John O’Neill (1855-1934). These three sculptures commemorate five of not only Saint John’s but New Brunswick’s most esteemed and celebrated rowers. The Paris Crew and Hilton Belyea set the world record (9:36 minutes) for the 1 ½ mile, single scull event in 1921.  In fact, Belyea donated this model of the Paris Crew in 1952.

John O’Neill was a remarkable craftsman. In 1874, he bought a plot of land in the north end of Saint John at age nineteen and built the first house on what was Murray Street. He spent his career designing and crafting racing shells for many of the best Canadian rowers of his time, including Wallace Ross, Jim Reilly and others. He is mentioned in at least two articles in the Saint John Telegraph Journal, which call him “one of the world’s greatest designers of racing shells.”[3]. In a 25 August 1923 interview, O’Neill talked about the Paris Crew and praised their athletic prowess, specifically Robert Fulton.  O’Neill had watched him race six miles on the Kennebecasis River with the Paris Crew and then almost immediately get into a single scull and race another three miles. Fulton won both races. 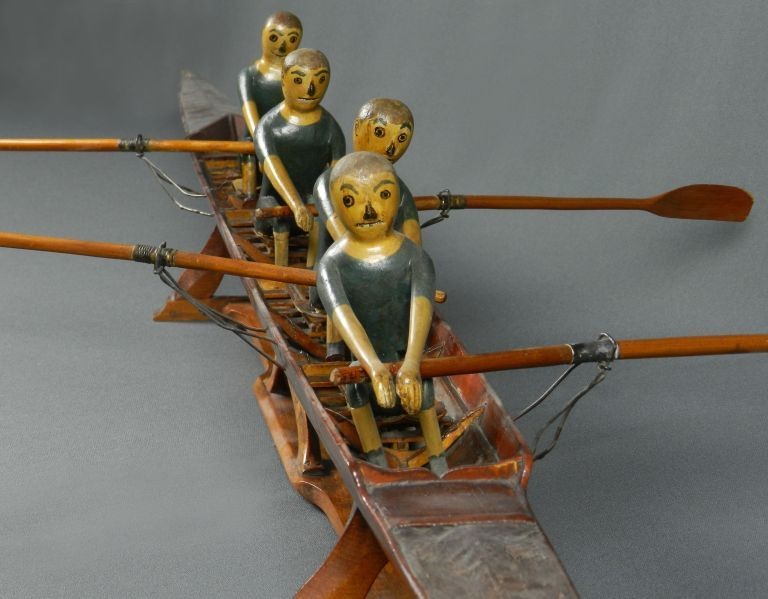 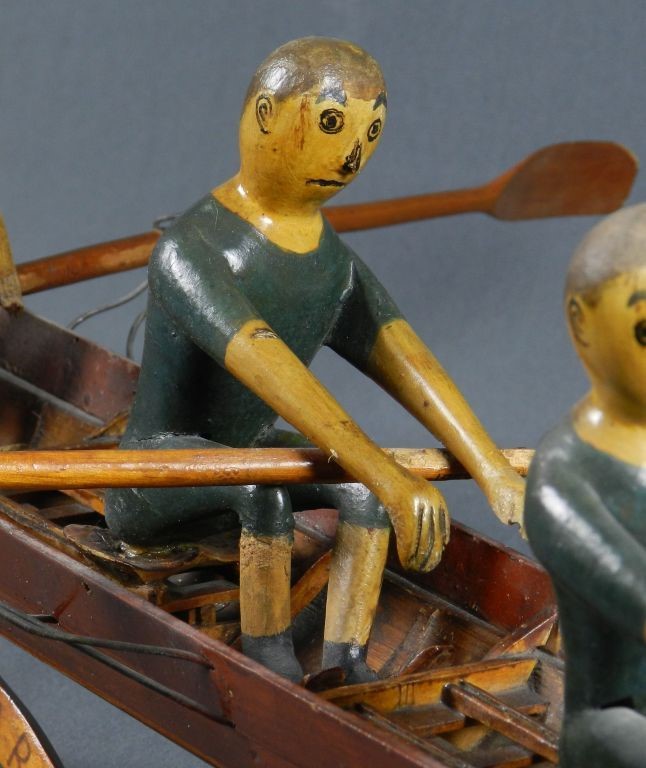 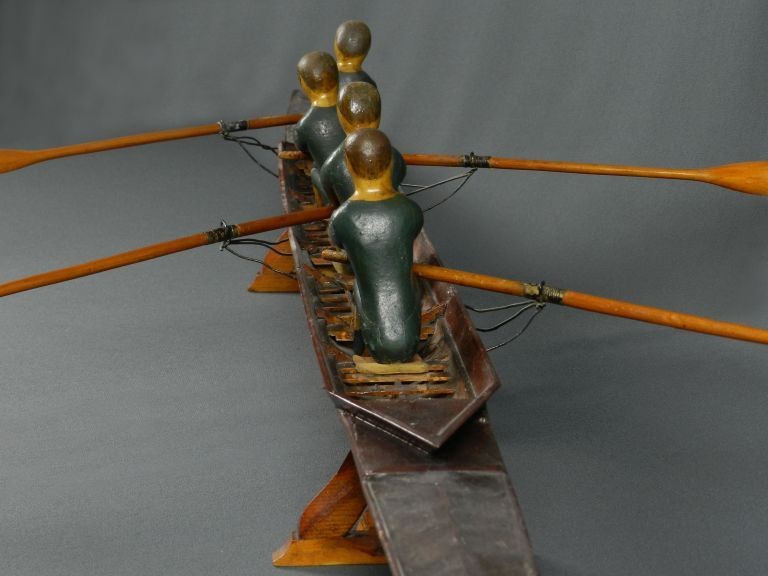 O’Neill’s expertise in boat building really shines through in his sculptures. Though the rower figures from The Start are somewhat lacking in detail, this is understandable considering that O’Neill was a professional builder, not an artist. The model rowing shell and oars are where O’Neill excels. They are very finely crafted and incredibly accurate. When looking at the inside of the hull, it is clear that the rowing shell was the main focus. Everything from the seats, slide rails, footplates, and ribs (U-shaped supports) is consistent with fine construction. This detail would have taken a knowledgeable and skilled hand to properly carve each of the intricate pieces that make up this model. This is a remarkable piece of New Brunswick’s and Canada’s heritage that highlights some of the sporting achievements and the story of John O’Neill and his achievements in racing shell design and construction.

[3] Saint John Telegraph Journal and The Sun, “When Wallace Ross Defeated Hanlan, Plaisted, Reilly, Boyd, and Others at providence, Rhode Island, in 1880 For the Championship of Two Continents”, 25 August 1923.

Your ticket for: The Paris Crew and John O’Neill

The Paris Crew and John O’Neill