The Nursing Association of New Brunswick (NANB) plays a vital role in healthcare in the province. Under the Nurses Act, NANB is legally responsible to protect the public by regulating members of the nursing profession in New Brunswick. NANB donated a significant collection to the New Brunswick Museum (NBM) of artifacts and archival records, documents and photos. Many of the objects were originally collected at the NANB head office under the dynamic leadership of the late Arlee (Hoyt) McGee. The collection includes approx. 3000 items ranging from badges to technical pieces of equipment (sterilizers, restraints, bedpans, scalpels, dental tools and much more) including more specialized equipment such as a hemoglobinometer and uniforms. The stories told through this collection also include the development of nurses’ education and unions. Thirty-nine series of documents relating to the history of nursing in the province in the archive range from meeting minutes and correspondence to brochures and publications of several groups. Items of special interest include nurse journals from military hospitals, and many photographs.

This array of artifacts relate to a profession known for dedication, emulating role models Florence Nightingale and Jeanne Mance. There are objects from the early days of private nursing through to war service and development of public hospitals. They tell stories of training and standards and unionization. NBM is pleased to work with NANB to commemorate 100+ years of a professional Nursing Association serving the province. New Brunswickers share a common asset in the professional quality of the nurses who provide care across the province. 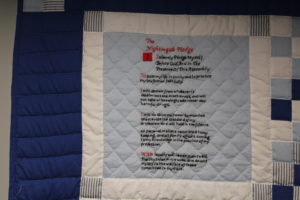 Detail of embroidered pledge from NBM Exhibition “NANB 1916 – 2016: One Hundred Years of Progress” 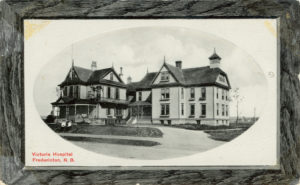 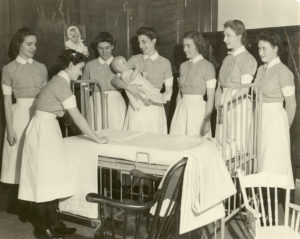 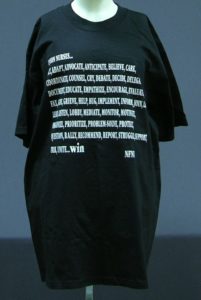 Lieutenant Elizabeth Burnham Lowe of Renforth, NB was born the same year NANB was established, 1916, and went on to have a nursing career that included service in Canadian Army General Hospitals overseas during WWII. In 1983 she received the Florence Nightingale medal from the International Committee of the Red Cross, the highest international distinction that can be awarded to a nurse. During her career she would have seen the role of the nurse change, evolving into a central figure in the public hospital.  Gary Hughes, NBM Curator of History and Technology, notes “Nurses started WWII in the uniform of a WWI nursing sister and ended the war in the same khaki as the men.

The stains on a nurse’s apron could tell a story. NBM conservation staff worked on the artifacts in the collection prior to display to keep the evidence of use while preventing decay. “Most of these clothing items are in pretty good shape,” according to Dee Stubbs-Lee, NBM Conservator; “they all have stains and signs of wear, but they’re historic stains. We always differentiate between new dirt and old dirt.” For example, dust that may have fallen on the apron in storage would be carefully removed, while a mark from caring for a patient would be left but stabilized to prevent the fibres around it from breaking. Conservation is a field of museum work that involves chemistry and close handiwork. Increasing stability of artifacts is one of its main goals.

Stubbs-Lee explains that anytime an object is put on display, there is a danger of harming it. Textiles are very vulnerable to light, as it increases the rate they deteriorate, and so it is important to limit the amount of exposure they get. “In conservation, our main loyalty is towards people in the future. But at the same time, if everything is locked away in the dark and nobody ever sees it or gets to research it, then its usefulness is limited. There’s always this balance between providing access to the collection and preserving the collection.” 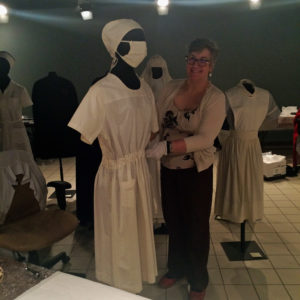 NBM conservators customized supports for each one of the uniforms. Starting with specialized mannequins made of ethafoam, a stable material firm enough to support the garment but soft enough not to stress the seams and weak areas, the task involved modifying the forms into an appropriate shape so that the fabric hangs correctly while supporting the fragile fibers to avoid stress and damage.

The NBM exhibition “NANB 1916 – 2016: One Hundred Years of Progress” provided an opportunity to view these artifacts. The impact of NANB was represented in this temporary exhibition. 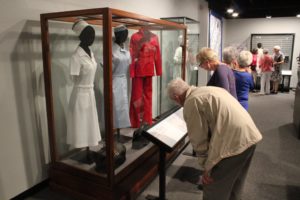 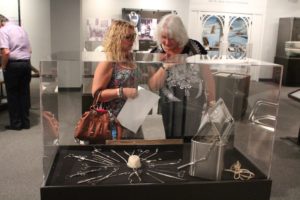 Prominent in the exhibition is the velvet-trimmed doctoral academic robe of Dr. Katherine MacLaggan, a past president of NANB (then NBARN). Dr. MacLaggan was a moving force behind increasing the academic foundation for nurses and, during her tenure as NBARN president, the first Bachelor of Nursing class graduated University of New Brunswick in Fredericton wearing the fur-trimmed academic hoods also on display. In earlier days, maritime nursing students travelled to Boston for their education.

Today the artifacts are stored under the care of NBM curators at the NBM Archives and Research Library and Collections Centre on Douglas Avenue. 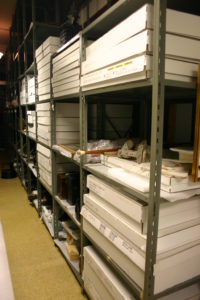 Storage area for nursing materials
at NBMCollections and Research Centre 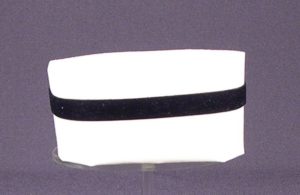 The Historical Museum of Tracadie was founded by Sister Dorina Frigault to commemorate the work of the order of nuns to which she belonged, Les Religieuses hospitalières de St-Joseph à Tracadie- Sheila, N.-B, whose unique and fascinating story involved caring for Leprosy patients in NB. Sister Dorina Frigault’s cap is in the NBM collection.

The Nurses Association of New Brunswick today is over 9000 members strong. Nurses have defined the standards of their profession through this organization, working with the government to create the nursing act and today following the vision ‘Nurses shaping nursing for healthy New Brunswickers.’ So while NANB continues to serve its membership into its next centuries, the staff at NBM have been pleased to provide this opportunity to reflect on where nurses have been, all across the province, actively working for the betterment of New Brunswickers, over the past 100.

Visit www.nanb.nb.ca to find out more about today’s NANB.

Your ticket for: The New Brunswick Museum celebrates National Nursing Week with this blog dedicated to 100+ years of the Nursing Association of New Brunswick