A recent paper written by Olivia King, Geology & Paleontology summer research assistant in the NBM Department of Natural History and M.Sc. candidate at Saint Mary’s University, Matt Stimson, NBM Assistant Curator of Geology and Paleontology, and Ph.D. student at Saint Mary’s University, and Dr. Spencer Lucas, Curator of Paleonotology at the New Mexico Museum of Natural History, Albuquerque, New Mexico, was recently been published in the international journal Ichnos, and is now open access for a limited time. NBM researchers routinely partner with colleagues around the world, with this study a good example of how work outside New Brunswick can be relevant to our understanding of our own provincial heritage. The paper can be found here:

The Union Chapel Mine fossil site in Alabama, where the fossils discussed were collected, is one of the world’s most significant fossil footprint sites. Rocks at the site are estimated to have been deposited 300 million years ago, vertebrate foot prints (amphibians and reptiles) have been studied at the site since the early 2000’s. This new study examines invertebrate footprints from the Union Chapel Mine site.

Fossil footprints known as “Kouphichnium” are typically thought to be made by horseshoe crabs, a group still living, that dates back more than 400 million years. This is a significant type of fossil footprint as it often reveals information about the paleoenvironment at the time the rocks and fossils were deposited.

In this study, Olivia and her co-authors have named 2 new species of Kouphichnium (K. atkinsoni, and K. minkinensis). The two new species are named after their discoverer, Dr. Prescott Atkinson and the late Dr. Steven Minkin who discovered the site. They also suggest that these fossil trackways were not made by horseshoe crabs but by an entirely different animal, a eurypterid. Also known as sea scorpions, eurypterids are more than a meter long and are well known from rock strata in northern New Brunswick. 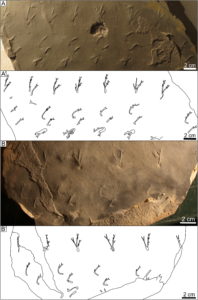 This is an important paper in that it sheds new light on the biodiversity of an important fossil site using footprints rather than the body fossils of the animals that made them, and it contributes substantially to our understanding of the genus Kouphichnium and the fossil environment the animal lived in, both in Alabama and New Brunswick.