Among the NBM’s collections is a wonderful, life-sized, carved wooden sheep (NBM 1961.22) affectionately nicknamed Agnes by NBM curatorial staff. From at least the mid-1870s until its donation to the New Brunswick Museum in 1961, this carved wooden sheep had served as a shop sign for businesses on Union Street and Charlotte Street in Saint John.  In the 19th century sculpted shop signs were frequently used to help people who couldn’t read, to find their way to specific businesses.  Early in Agnes’ career, this sculpture served as a sign for John R. Smith’s variety store and later, perhaps more appropriately, led the way to the wool shop of John Alexander Davidson, Sr.  It was probably made around 1875 by Robert Graham, one of several generations of carvers who mainly produced figureheads for many of the sailing vessels built in the province.  The copious layers of protective paint that were applied to it over the years before its retirement from the retail service and arrival at the New Brunswick Museum, have masked some of the more delicate carving of the wool and detailed features.  Agnes is still remembered fondly by many of the city’s older residents.

As with all artifacts going out on exhibition, Agnes first visited the museum’s conservation lab for a check- up. After carefully examining her, NBM Conservator Dee Stubbs-Lee spent time over a few weeks stabilizing the sculpture and improving its appearance for exhibition. Over the years, Agnes had developed extensive cracks in the paint layers and in the wooden structure itself, and had gone through a number of historic repairs and numerous coats of new paint before being collected by the NBM. In addition to small cracks in the paint layers throughout the whole sculpture, an especially deep and disfiguring crack had developed from the chest, around the neck, down the length of the spine and onto the tail. This cracking is consistent with damage from fluctuations in temperature and relative humidity over time, and probably occurred slowly over a number of years. Although the sculpture was relatively stable, it required surface cleaning and the major cracking was disfiguring, especially as it was in some highly visible areas such as the sheep’s throat and spine. 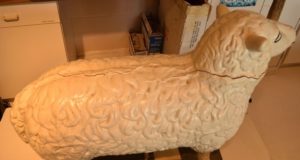 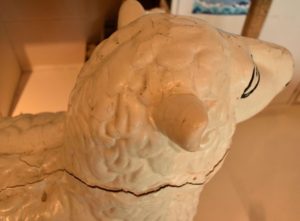 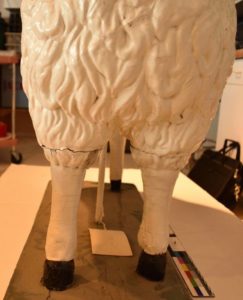 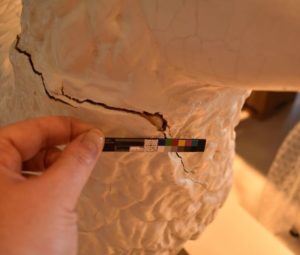 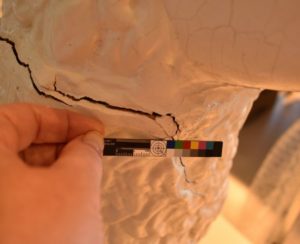 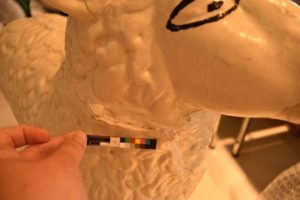 After surface cleaning the whole sculpture with a conservation detergent and distilled water and solvents on cotton swabs, Dee carefully filled the cracks with a soft wax using a method that would reduce the visibility of the cracks, help protect against further cracking, and not contribute any sources of further damage. The fill will remain fully reversible indefinitely, in keeping with museum conservation ethics. 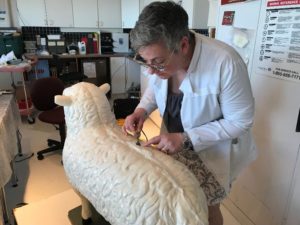 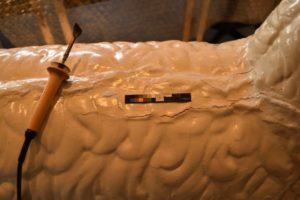 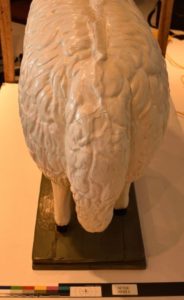 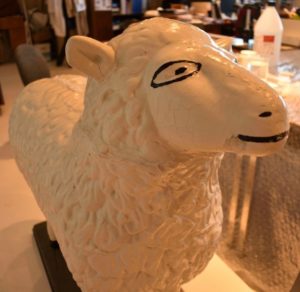 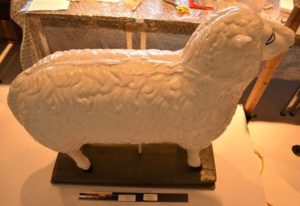 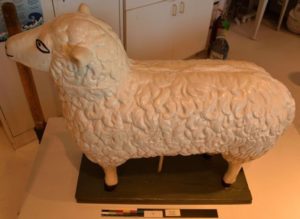 Agnes is now on exhibit in the Discovery Gallery at the NBM to delight a new generation of kids and kids at heart!

Your ticket for: NBM Conservator gives a wooden sheep its life BAAA ck