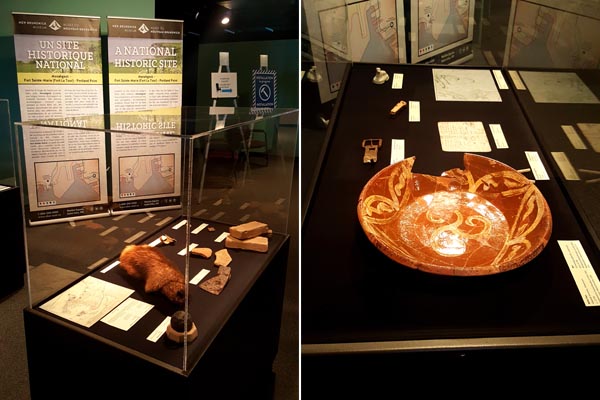 Ongoing: Visit the display on Fort La Tour National Historic Site. Menahgesk – Fort Sainte-Marie (Fort La Tour) – Portland Point is located on the shore of today’s Saint John harbour. It has a long history of human activity and occupation. Archaeological evidence shows that for at least 4000 years Indigenous people made use of the area for ceremonies, gathering and trade. It was an important terminus for the portage around the dangerous mouth of the Wolastoq (Saint John River).

Its strategic importance was recognized by early French settlers. In 1631, Charles de Sainte-Etienne de La Tour built Fort Sainte-Marie, a fortified trading post, to control access to the rich inland resources. The site bore witness to many confrontations for authority in Acadia between Charles de Menou d’Aulnay de Charnisay and La Tour. In April 1645 the fort faced its final battle – Françoise Marie Jacquelin, La Tour’s wife, defended it for three days before surrendering. Eventually, the fort was abandoned for a new one across the harbour.

In the 1760s, a consortium of traders, Simonds, Hazen and White, established Portland Point, a settlement on the site. Their trading post proved essential in meeting the needs of thousands of loyal British refugees who arrived in 1783 after the American Revolution. Later uses of the locale included shipyards and a nail factory. Today, we remember this national historic site for the diversity of its cultural associations and its significant impact on the heritage of the region.