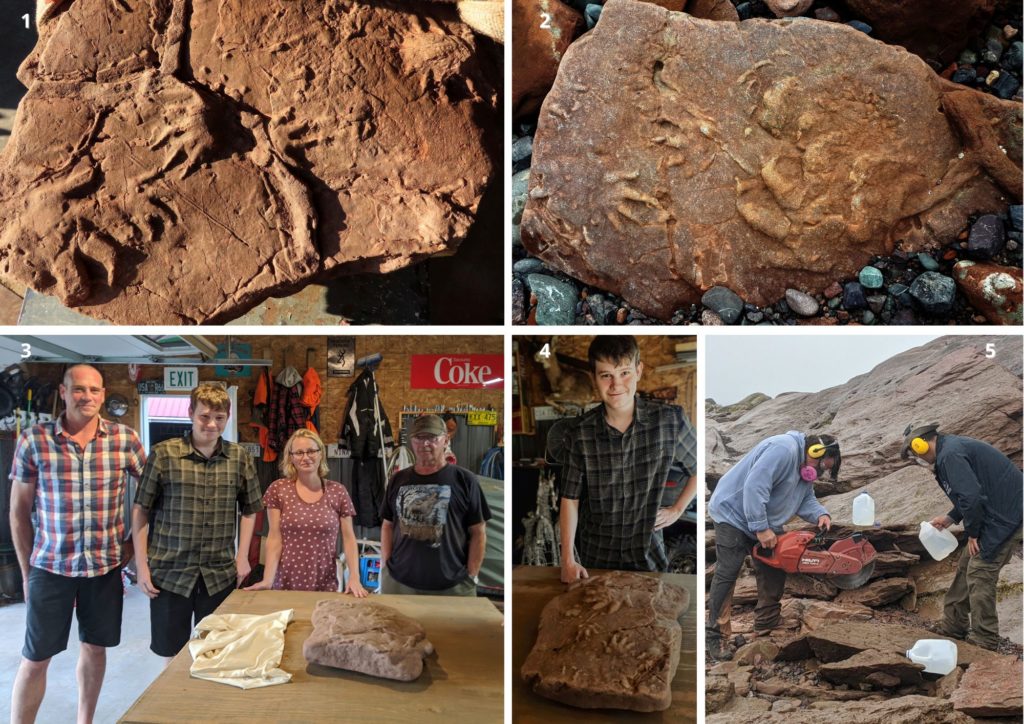 The New Brunswick Museum (NBM) and the Stonehammer UNESCO Global Geopark are excited to announce the significant discovery of fossil tetrapod footprints in the Geopark in southern New Brunswick (NB). As these footprints receive detailed study in the months and years to come, they will undoubtedly unlock secrets about the as yet mysterious animals that made them. Dr. Paul Olsen, vertebrate paleontologist at Columbia University, and an expert on Atlantic Canadian Triassic-Jurassic stratigraphy, is working with the New Brunswick Geology team to study the footprints. “The oldest of the Permian period rocks (290 million years old) are exposed on Prince Edward Island. However, the younger half of the Permian geological period in Atlantic Canada is only found on a tiny sliver of Les Îles-de-la-Madeleine, Quebec (Magdalen Islands), and that has produced no fossils. This Late Permian time period is not well represented worldwide, which makes the discovery of these footprints very important to our understanding of continental life prior to the latest Permian extinction event.” says Dr. Olsen.
In August of 2020, the Graune-Gregg family of Sussex, NB were vacationing near Quaco Head, just outside St. Martins, NB. While enjoying the shoreline searching for sea-glass, Patrick (Gregg), Gaby, Shawn and Lukeus Graune-Gregg stumbled upon a set of large and pronounced fossil footprints.
The rocks of Quaco Head have traditionally been identified as of late Triassic-age, about 230 million years old, the time during which the first dinosaurs evolved. However, geologists have speculated that the strata at Quaco Head are older, from the late Permian Period at least 260 million years ago. This is just before the largest mass extinction in the fossil record and from before dinosaurs evolved. No fossils have been found in these rocks prior to the Graune-Gregg family discovery, making these fossils very significant.
Matt Stimson, New Brunswick Museum Assistant Curator of Geology and Paleontology and a PhD student at Saint Mary’s University states that “Fossil footprints in general provide important information about animal life and biodiversity in the absence of fossil bones, and are quickly becoming an important tool for paleontologist in studying ancient biodiversity in New Brunswick and Atlantic Canada in general.”
Working with the Graune-Gregg family, the New Brunswick Museum, the New Brunswick Geological Surveys Branch, Archaeological Services, and the Department of Natural Resources, utilized drone imaging, laser scanning, and traditional geological and stratigraphic mapping techniques to ensure both the fossils and this new fossil site were fully documented. In the course of the work additional large blocks of sandstone containing multiple species of fossil footprints were discovered by NBM Research Associate Olivia King and members of the Graune-Gregg family. These were also successfully recovered from the shoreline.
Catrina Russell, NBM Interpreter, Geology, is quick to note that, “Like so many exciting and important fossil discoveries, this one was entirely accidental. With the threat of a hurricane off the Atlantic coast, the Graune-Gregg family did the right thing to recover the fossil from the beach. They documented exactly where the fossil was found, and promptly contacted the Geology and Paleontology Section at the New Brunswick Museum in Saint John. Actively collecting fossils without a permit is illegal in NB under the Heritage Conservation Act; however, there is a ‘duty to report’ a fossil if you find one. Had the Museum not been contacted, this very significant part of the Stonehammer Geopark may have been eroded by the Bay of Fundy tides and lost to science forever.”
Stonehammer UNESCO Global Geopark, North America’s first geopark, incorporates a billion years of Earth’s history across more than 60 significant geological and fossil locales, with more than 12 publicly accessible sites. With a landscape created by the collision of continents, the closing and opening of oceans, volcanoes, earthquakes, ice ages and climate change, Stonehammer includes geological stories from the late Precambrian time a billion years ago to the most recent Ice Age, and almost everything in between.
Photo 1 – Large and pronounced fossil footprints (Photo by Matt Stimson NBM).
Photo 2 – Large and pronounced fossil footprints (Photo by Gaby Graune-Gregg)
Photo 3 – Patrick (Gregg), Lukeus and Gabby Graune-Gregg, and Karl Graune stand with the set of large and pronounced fossil footprints discovered at Quaco Head (Photo by Olivia King NBM)
Photo 4 –  Lukeus Graune-Gregg with his fossil discovery (Photo by Gaby Graune-Gregg)
Photo 5 – Steven Hinds, geologist at the NB Geological Survey Branch and Matt Stimson, New Brunswick Museum Assistant Curator of Geology and Paleontology and a PhD student at Saint Mary’s University.(Photo by Olivia King NBM)
For more information:
New Brunswick Museum
Caitlin Griffiths or Aristi Dsilva,
Communications and Marketing,
506-654-7059 or 506-643-2358
info@nbm-mnb.ca